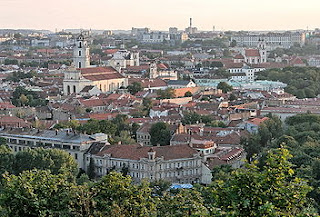 I was fortunate to spend five weeks this summer in Europe, two in Lithuania, two in Denmark, and one in Norway. I was in Vilnius as part of Summer Literary Seminars and this provided an opening to a part of the world I knew little about. Vilnius was a major center of Jewish life before the war and after the Holocaust, only traces of this remain. The history hangs heavy, and Lithuania, which has only been a country since 1990, is struggling to come to terms with what happened before, during, and after the war and what it means to be Lithuanian. I was surprised how deeply this place spoke to me and the enormous contrasts between darkness and light provided a constant churning. It's also a country where basketball is hugely popular and people wanted to talk hoops. I had time and space in Vilnius to write and look forward to going back. 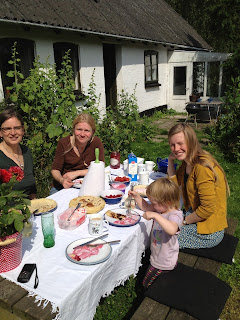 On the way we stopped in Denmark to spend time with Fiona's cousin Claire and her family on their farm. We enjoyed the chickens, pigs, horses, cats, and dogs and the seven children who range in age from eighteen to three. We also stayed at Fiona's uncle and aunt's cottage in Langeland, which was remote and beautiful. It rained almost every day, which was a nice break from the heat of Minnesota.

Back home, we marked the one-year anniversary of my mother's death on August 30 and I'm still sorting through that and working things out with my siblings. The travel this summer provided a separation and an opportunity to reflect on my new situation and what I want to do. 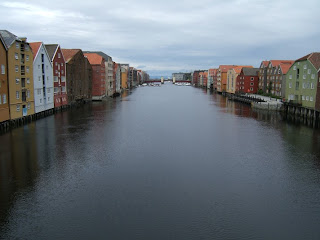 Fiona received an invitation to speak in Norway the first week in September and I could not pass up the chance to go with her. We spent a few days in Trondheim, pictured above, which is the farthest north I've been in the world. We saw few tourists there and remarked on how many similarities were apparent between Norwegians and Minnesotans. In Oslo we met with writers, editors, and publishers, and I was amazed to find out some of the differences. In Norway, college tuition is free, writers are eligible for government stipends, and when a children's book is published, the government buys 1,500 copies for Norwegian schools and libraries. Considering the population differential that would be like 75,000 copies being bought in the States for libraries for each book. I'd be fine with 1,500.

In between trips, we had two weddings, a week-long visit from our nephew, and an abundant garden year. I value the transition time of September and am glad to reconnect with my fellow Spuds.

John, I am thrilled to read about your summer and all of the places you visited! Who knew basketball was a sport in Lithuania? And the company of family as well as writers sounds very rich. I have a friend who lives on a remote island off the coast of Norway and Trondheim is the nearest village for shopping. I think I must make time to visit. She and her husband left St. Paul years ago to raise their children in Norway-- with free college and stipends for writing, I can see why. Welcome home, John, I hope your fall continues harvesting all that you cultivated this summer.

It does indeed sound tempting to be a children's book writer in Norway.

I like all the points of connection you find every place you go. You make a fine ambassador, John.

All this travel, and then it's nice to come home bringing new friends and new perspectives as you start up comforting routines again. Happy writing.

John, what a rich summer of travel and cultural experiences! I admire how you make the most of these opportunities and am sure they will be reflected in your writing and in the way you live your life.

Sounds like a great summer. Whenever I hear the name Vilnius, I think of Sean Connery in The Hunt for Red October...

Where will you go next, John? I can only imagine!

Such a smart man you are to take advantage of these opportunities, and to welcome them into your life.

Sounds like an eventful summer, John. Strange how history can linger in the very fabric of a place, at times. Glad to hear you're back stateside and returning to your usual (productive) routine!