If I weren’t a writer, I would be a horticulturalist or historian or geologist or stonemason or teacher or quilter or harpsichordist or… The trouble with me is that I have too many interests and am constantly pulled in numerous directions. For six years I worked in a high school guidance office as the Career & College Advisor. I think I was more interested than the students in all the different opportunities out there. I hosted countless college reps and was intrigued by the variety of majors offered—a much greater variety than was available when I went off to college forty years ago.

Historic Preservation was a “new” major that particularly drew me. I guess you could say my husband and I are constantly involved in the historic preservation of our 1930s log cabin home. And right now I am obsessed with horticulture—the cultivating and planting of my perennial and herb gardens and numerous container gardens, as well as protecting them from the growing deer population. I also manage to fit in teaching my writing workshops and learning to play a new musical instrument—the newest will be a hammer dulcimer this summer. Writing is one of those careers that allows (even encourages) diversions, so I consider myself a very lucky person.

P.S. Of course the need for an income does have to be considered, but you can probably tell that’s not my #1 priority.
Posted by Edie Hemingway at 2:31 PM 7 comments:

What would you be doing if you weren't a writer? 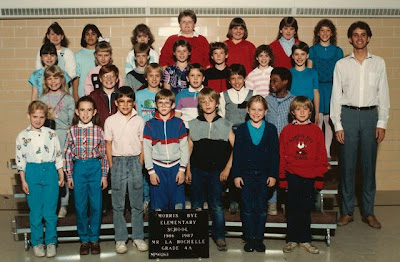 This is a timely topic because I was asked that question just a few days ago by a student when I was giving an author presentation in western Minnesota. The answer was simple: I'd still be a teacher (though after reading Christy's post, I'd be tempted to go into textile design).

This is a photo of me with my fourth grade class back in 1987. Strange to think that my students in the photo are now older than I was when the picture was taken! I was only able to recall about a quarter of the names of these children without checking my notes on the photo, but I remembered just about every one of their personalities, and something memorable that they said or did. George brought a bucket of frogs to school one day, and they escaped and hopped all over the classroom. Lucas, for Show and Tell, burped the entire alphabet and then answered questions from the rest of the class in 'Burp Talk.' Carl drank two cartons of milk every day at lunch for the whole year because I had once said that milk had made me tall, and he was tired of being the shortest in the class. Darlene loved homework and begged for more. Jessica's poem that she gave me on the last day of school still hangs on my kitchen wall:

Mr LaRochelle is tall,
and he is not so mean at all!
Drawing he likes to do,
Maybe he'll draw you!
I would like to see him on skates,
He could look right through the gates.
Although he is my favorite teacher,
He does not make a very good creature.
I will not forget him,
Because he was not a bit too prim.

Wherever they are now, I hope they are all happy and doing well.

I only lasted four years as a teacher before I got my first book contract and decided to see if I could make a go of it as an author and illustrator. Though I very much enjoy working with students now as the visiting author, I still miss the connections and impact I had back when I was a classroom teacher.

And it just so happens that tomorrow I head back to the very school where I used to teach, to work as the visiting author with the fourth and fifth graders there. It has been years since I've been back. Life is indeed an amazing circle.
Posted by David LaRochelle at 6:10 PM 8 comments:

I just found out that Top of the Order joins Road to Tater Hill on the Bank Street College of Education Best Children's Books of the Year for 2010 list. I will enjoy some spuds in celebration.
Posted by john at 8:05 PM 8 comments:

past and future lives 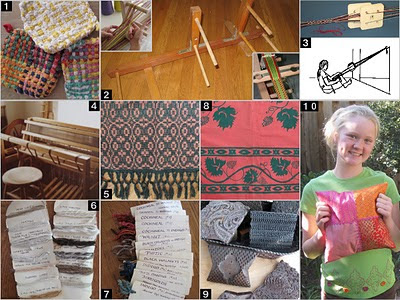 I would be a textile designer. I LOVE the textures of fibers, the colors and patterns. The following list is a key to the photo collage (click on image to enlarge).
1. It all began with potholders in my early years. I wove them with stretchy loops on my metal frame. Over, under, over, under… I became the supplier for everyone on our street.
2. In junior high my art teacher, Mr. Barrett helped me make this inkle loom and taught me how to weave sash belts and guitar straps.
3. In high school friends and I learned backstrap card weaving. We wove belts and sold them at shopping centers and craft fairs (hippie days).
4. I advanced to a floor loom in high school and continued weaving through college. I learned how to spin my own yarn while on a college overseas program in Scotland, and even mailed home a freshly shorn Shetland fleece. My Gilmore loom and Ashford spinning wheel are pictured here.
5. A sample of one of the many things I wove on my floor loom.
6. I learned to spin alpaca, llama, camel, wool, linen, cotton, silk, and jute. Friends used to bring me their dog hair combings!
7. In these mother-earth days I used natural materials to dye fibers, creating a whole spectrum of colors. Friends brought me onion skins, walnut hulls, and lichen.
8. In high school I began printmaking and silkscreened repeat patterns to design fabric. All these years later there are still pins in the seams of this skirt!
9. These are Indian textile blocks I’ve collected.
10. Here is my daughter (a few years ago) sporting a top we printed together from those Indian textile blocks, as well as a silk pillow also done from the textile blocks.

This is a tiny bit of my textile history, but the history really goes back much further. My ancestors from Scotland and Northern Ireland were weavers. More recent ancestors worked in the textile industry in upstate New York, however I knew none of this when I began to dabble in these areas.

What would I be doing if I wasn't a writer?

Our topic this go-round is exactly that, wondering what we'd all be doing other than writing. For a long time, I wanted to be a photographer. I was one of those people who was never without my camera, and I have boxes and boxes of photos to prove it. But then I took the big move. I officially declared myself professional and took my first gig. This guy had a very nice stallion he wanted to start advertising about as a stud and needed some photos.
Have you ever tried to take a decent picture of a mad horse who wants to take your head off and in no way would ever stand still and pose?
Um yeah. Ever heard that saying about never turning something you love to do into a business, because you won't love it anymore? Very true. That was my first and last job as a professional photographer.
I am pretty sure I would be a teacher. I did spend a couple years teaching junior high and high school social studies, my actual college major, and now I teach online with Gotham Writer's Workshop. And I still love to teach. My dream, actually, is to be a professor at a small college somewhere, and I haven't given up on that yet. So maybe I can do both...
Posted by Stephanie at 7:18 AM 5 comments:

Deadlines seem to hover and loom. They are rather insistent, and as time ticks, they can become bayou mosquitoes buzzing around your head. You might swat at them, and they may dodge around bit, but ultimately they remain steadfast. Deadlines are structure that contains a writer’s imaginal energies. They allow the writer the freedom to create, and insist that their efforts result in a product of creation. Deadlines are kissing cousins to the writer’s editor-brain, that half of part of the brain that all writers must insist go out for tea while they are in the process of creating, the half that they must invite back inside to help them sculpt their work into art.
The word deadline made its debut as a written word in 1864 finding its roots at Fort Sumter, the largest Confederate military prison in the American Civil War. It was reported that “seventeen feet from the inner stockade was the ‘dead-line,’ over which no man could pass and live.” (Lossing, 1868) The term morphed and found its way into newspaper jargon by the 1920s where its common meaning evolved to indicate a time limit. It’s no small wonder that a certain degree of angst companions this word for writers today.
Postscript: On Wednesday, I wrote my blog entry. On Thursday, my blog entry date, I was very busy and having completed my blog entry I did not think about it once. On Friday, driving home from work, panic rose (i.e., “dead line”). This Monday, Monday morning, my blog is appearing. I am a lesson for all writers everywhere.
Posted by betsy woods at 6:16 AM 5 comments:

I missed my post days for both the cycle on technology and the following one on deadlines. I gave myself a "time out" from the blog group. But I didn't misbehave. Instead, let's say I've been doing independent study (really more like head on combat) on both topics. I had MAJOR computer problems concurrent with multiple deadlines. I am not keeping all my balls in the air.

Over spring vacation I counted 900 e-mails in my inbox. Like Sisyphus, I'm caught in a never-ending cycle. I try to clear out my inbox, but it fills right back up. I hardly bother to keep up with Facebook posting these days. Anyone else out there feeling increasingly ADHD with the demands of modern life? There have been recent studies coming out about our INability to successfully multitask.

I can't help musing about the larger idea of TIME. Two decades ago I read a book that still resonates, Time Wars: The Primary Conflict in Human History by Jeremy Rifkin, Simon & Schuster, 1989. Rifkin explains changing perceptions of time over the course of human history—from nature time, to clock time, and now to computer time. He claims there is a war going on, between the advocates of speed and efficiency and those who prefer a "more empathetic union with the rhythm of nature."

I was web-surfing to see if I could find excerpts from the book, and stumbled upon some quotes about time that I will share instead:

"I say, let your affairs be as two or three, and not a hundred or a thousand; instead of a million, count half a dozen."
— Henry David Thoreau

"A cup of tea with my mother,
looking at each other,
enjoying our tea together.
The point in life is to know what's enough.
With the happiness held in one inch-square heart
you can fill the whole space between heaven and earth."
— Gensei, 1650