A friend brought this to my attention and wanted me to see the recent favorite book Jadeveon chose.
Happy holiday wishes to all.

Defensive player of the year

Why him:Considered the top recruit in the 2011 class, he combines rare speed (4.5 in the 40) with strength and size. Had five touchdowns on defense, 162 tackles, 29 sacks, 29 tackles for loss, 11 caused fumbles and six fumbles recoveries. On offense, he had 20 carries for 274 yards and nine touchdowns. His team was 38-6 in the last three years. Showed he won't have trouble adjusting to next level by dominating talented athletes in the Shrine Bowl in Spartanburg, S.C., drawing five holding calls while making five tackles for loss, including three sacks in the game. He's undecided in his college choice.

Little-known fact:"I am an extremely sore loser...I hate to lose at anything."

High school highlight:"Winning the 2008 State Championship in football vs. Northwestern ... They are our crosstown rival ... We actually beat them twice that year. But beating them in the title game was awesome."

Favorite teacher:"Mr. Joe Koon ... My English 4 teacher. He is the smartest man I know. He is a great guy that enjoys helping kids learn."

Funniest recruiting story:"People (coaches) always telling me what they can do for me and they really don't even know me."

After football, I'll:"Go fishing with my granddad and spend time with family and friends." 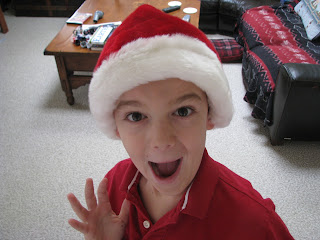 I love the holiday season -- stringing lights and decorations, listening to seasonal music, inhaling the warm smell of cookies and pies baking in the oven, snuggling under a comforter to watch old holiday movies, even shopping!! Until I entered an early "retirement" a couple years ago and became a full-time stay-at-home dad, I worked with kids at a middle school and so I was able to also enjoy the yearly rite of a two-week Christmas vacation -- definitely a way to keep the "kid" inside me excited about the holiday season!
Like others, we have some traditions involving ornaments and tree-cutting and opening one present on Christmas Eve, but the "tradition" I most cherish is our private designation of our home as a "drama-free" zone during the holidays. As many know, the holidays can be stressful and, unfortunately, that stress can many times result in familial discord. It's nice to know that no matter what happens when we visit others during the holidays, our own home remains a haven for the holiday spirit of peace and joy and goodwill toward all. What more could you want, or wish for others?
I truly hope everyone who reads this can find peace and joy this holiday season, and beyond. If you need a little emotional pick-me-up, just find a child to share some time with -- their sense of wonder and instinctive joy during this season should be a good antidote to any potential holiday blues.
Posted by Mark at 11:37 AM 7 comments: 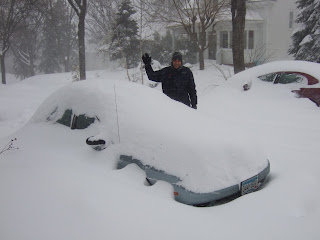 This was ten days ago when we got seventeen inches, but we've had more since and are on our way to our snowiest December ever. Solstice marks a nice time to think about lessening or letting go of some things and increasing others in the new year as the days increase with light. Happy holidays to each of you.
Posted by john at 6:58 PM 7 comments: