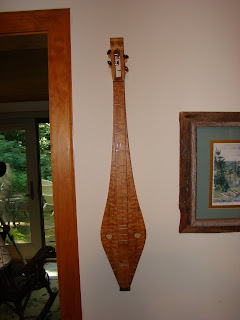 A "writing" life is what most of us writers hope to attain--the freedom of not having to work a "day job" in order to make ends meet with only short spurts of time to squeeze in writing. When I say "writing" life, I also mean engaging in "writerly" activities, such as attending writers' conferences or retreats, taking or teaching writing workshops, belonging to a critique group, promoting your published work, reading as a writer, researching new ideas, etc., all of which take much time away from actual writing. I can finally say I have attained the writing life, including not always getting much writing done.

And then there are the ancillary benefits of the writing life--the chance to follow one of those little obsessions you have for the purpose of better understanding your characters or making your writing more accurate without feeling as if you're wasting your time. My current ancillary interest (or should I say obsession?) is learning to play the mountain dulcimer.

Four years ago, when browsing through a craft shop, I came across a beautiful instrument. I was drawn to it initially because one of my characters in ROAD TO TATER HILL plays the mountain dulcimer. But I think it was the craftsmanship and the lovely honey-colored, curly maple with its intricate swirls of wood grain and texture that made me want to hold it, strum the strings, and listen to its musical tones. I splurged with money from a school visit, bought the dulcimer, and found the perfect place on my bedroom wall to hang it. I did not learn to play it until two years later. My editor wanted more of the "hog fiddle" worked into my novel, and in order to do that I decided I needed to do more than just read about it. I already had enough of a musical background to read music, understand the theory of major and minor keys and chords, time signatures, and rhythm, but I had never played a string instrument.

I signed up for a one-week series of classes and learned just enough to pique my interest and strum out a few simple tunes while singing along. Throughout the year, I kept in touch with a classmate, and we met to practice every few months. I also gave my husband a dulcimer for Christmas and drew him into this obsession. Recently we both attended the Dulcimer Week at Western Carolina University in Cullowhee, NC, where we took classes throughout the days and attended amazing concerts each night, followed by jam sessions of all levels of ability in the dormitory lobbies. We lived and breathed dulcimer music (folk, spiritual, blues, rock, and classical) for that entire week and are hooked! No, we aren't experts and don't plan to become performers, but we can play some recognizable tunes, some of which I plan to perfect well enough to be comfortable playing during my school visits to promote my book. In the process, I've also added depth to my characters and setting for ROAD TO TATER HILL (and perhaps future books with an Appalachian setting) and have gained a whole new set of friends and potential readers.

My dulcimer still hangs on my bedroom wall (alongside my husband's) when I'm not playing it. But on a regular basis we take them down, tune them, and make music!
Posted by Edie Hemingway at 10:00 AM 10 comments: 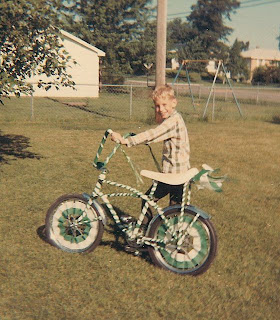 How can it be that we are already nearing the halfway point of summer? It seems like it was just yesterday when the ice finally left White Bear Lake.

While I am happy to be making lots of good summer memories this year, I'm also thinking about some of my favorite summer memories from when I was growing up. They include:

* putting on paper bag puppet shows with my neighbor LuAnn

*decorating my bike for the Park and Rec's "Wheels Day" celebration

What do any of these memories have to do with writing? Nothing really. Other than that someday one of these scenes, in an altered form, might find itself in one of my stories. The middle grade novel that I'm working on now takes place during the last week of summer, and as I fill in the details, I'm harvesting my own summer memories of sleeping late, chasing the neighborhood ice cream truck, and constructing a homemade miniature golf course.

So, what is one of your favorite summer memories?
Posted by David LaRochelle at 7:15 PM 4 comments: