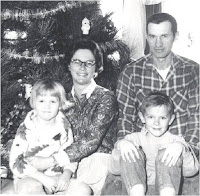 Due to moving into a new house and a snow storm that prevented the internet guy from showing up, I'm just catching up after 10 days offline. All my childhood Christmases were of the cold, snowy, Wisconsin variety. The photo above was taken in 1969, when I was four and my older brother was seven. Tradition at my house always included the Sunday School Christmas program, which, in 1969, provided my first ever public speaking gig. Here was my part:

Welcome to our program, we are glad you came

When it is all over, we hope you'll feel the same.

I'd like to apply that to our blog. Welcome. Glad you're here. Hope you are, too. Happy Holidays.

For me, the holiday season means catching up with friends and family, taking a few more days off from writing than usual, and passing on traditions to our son. Thankfully our home suffers none of the dysfunctional antics and blowouts that make the holidays such a stressful time for many children . . .

My first job out of college was working at a residential treatment center (kind of like a group home) for kids aged 2 – 20. Because the center had a “no rejection” policy we housed the toughest kids from Washington, Idaho, and Oregon. I had been working only a month or two when Thanksgiving rolled around and I witnessed, firsthand, the struggles that abused and neglected children face at the holiday season. The innumerable timeouts and restraints that filled the “big day” culminated in the turkey being thrown across the dining room by one of the residents, just as I was about to carve it. Once the mayhem subsided, we saved what we could and made turkey sandwiches...

And then came Christmas. Having the least seniority of the center’s staff, I was one of those assigned to work the day shift from 8 to 4, which included taking all the children to a local restaurant for Christmas dinner. Suffice it to say that the antics of Thanksgiving were a fond memory in comparison to Christmas morning, but by early afternoon we had managed to load up the kids in the van without anyone (staff or residents) requiring medical attention.

At the restaurant, I told the kids what my boss had told me: “Order whatever you want, regardless of the price.”

One young man, in particular, had spent most of the day either in timeouts or being restrained to keep from hurting himself or others. He had destroyed his room and had called me (and the other staff) every name in the book but was now tuckered out, and calm. He asked me what I going to order.

“I’m leaning toward the roast duck with orange glaze,” I told him. “I’ve never eaten duck.”

“Then we’ll just have to let someone else eat it, and order something else.”

Immediately, his mood brightened, as though a weight had been lifted from his young shoulders. He had been worried, no doubt, that his earlier unruly behavior would be held against him. But with all forgiven, he led the group in playing “I spy” and making up “knock-knock” jokes till the food arrived.

Christmas is over and I feel like a grinch for packing the decorations away so quickly, but as I read the blogs from my fellow potatoes, I am reminded that Christmas is more than just stuff. It is David's mom's love for (and pride in) him, that she expressed so beautifully while she was here on earth. It is Edie's homesick soldiers and their silent thoughts. It is the grass and water under the bed at Carmen's house. It is Christy's sharing of Christmas in The Little House on the Prairie. It is in all of us when we take time to remember and to share those memories with others.

I was ten and the only thing I wanted for Christmas was a Baby Tender Love doll (well someone in this group has to be shallow). Mom and dad said she was too expensive (I believe she cost $12), so I braced myself for "disappointment." When all the presents were open, though, my mean old big brother, Bob, brought out one more. It was the Baby Tender Love doll, and as I ripped open the package I was happier than I'd ever been. But it wasn't because of the doll (okay, maybe partly/mostly because of the doll), it was because of the person who gave it to me. I was a pain in the neck little sister, still am, yet he bought me that wonderful little pink doll that drank a bottle and wet her pants.

While Baby Tender Love now resides in a landfill, my gratitude for Bob's generosity is still with me. In the 38 years since, no one has surprised me as much as he. And no one has taught me more about giving from the heart.
Posted by Diane Adams at 12:49 PM 3 comments: