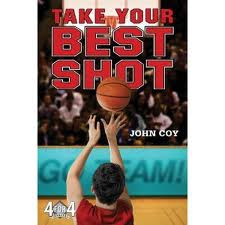 The fourth and final book in the 4 for 4 series comes out on February 28. I will be pleased to have all four books together so kids (and adults) can read them one after another without having to wait.
These books are realistic fiction for third, fourth, fifth, and sixth graders and feature a different sport for each book. Despite the cover, they are about much more than sports and kids have responded positively to this.
I can use your help in getting these books in the hands of readers. Please let any kid or parent you think would be interested know that all four will be now be out. Thanks.
Posted by john at 5:56 PM 8 comments:

Our topic this round is book awards. Everyone’s heard of the Newberry and Caldecott awards - as Stephanie said in an earlier post, the “academy awards” of children’s literature. But there are dozens, if not hundreds, of other awards that bring attention to quality books. Two of my favorites honor humor in children’s stories.

The Sid Fleischman Humor Award is given by SCBWI to reward “authors whose work exemplifies the excellence of writing in the genre of humor.” It’s been around only since 2004 but already the list of winners reads like a “greatest hits” collection of contemporary classics, including Clementine, Al Capone Does My Shirts, and Absolutely Positively Not – the latter by our very own David LaRochelle! I’ve read all but one of the winners and I’m awed by how each one is not only hilarious but also supremely crafted.

In England, the Roald Dahl Funny Prize has an even shorter history. Created in 2008 by Children’s Laureate Michael Rosen, the prize has two categories (six and under; seven to fourteen) which makes for two winners and twice the fun! Personal favorites of mine from shortlists for the prize include Urgum and the Goo Goo Bah, The Boy in the Dress, and The Ogre of Oglefort. I haven’t read any of the winners yet – they must be even funnier! (As an aside, this year the Dahl prize judges included 400 students who read the shortlisted books, discussed them, and voted on their favorites.)

Both awards remind us that humor has a unique value in children’s books, as it does in all our lives. Check out the list of past winners/nominees and I’m sure you’ll find something to tickle your funny bone.
Posted by Mark at 8:29 PM 5 comments:

I Want My Hat Back 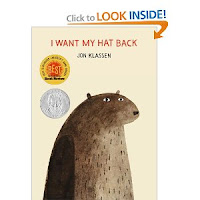 I just bought the book, I Want My Hat Back, written and illustrated by Jon Klassen. Published in 2011, it won the Ted Geisel Award. It's such a simple book with a bear asking his animal friends, "Have you seen my hat?" A bunny, who is obviously wearing his hat, says "No. Why are you asking me. I haven't seen it. I haven't seen any hats anywhere. I would not steal a hat. Don't ask me any more questions." The bear moves on, until he realizes that the rabbit is indeed wearing his hat. The ending is priceless, and I laugh every time I read Bear's guilty answer to squirrel who is looking for a rabbit wearing a hat.
Posted by Diane Adams at 11:05 AM 7 comments: