A Dream of a Sunday Afternoon in Alameda Park 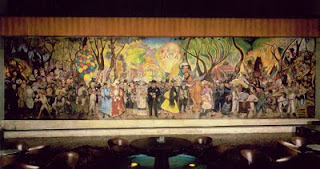 A Dream of a Sunday Afternoon in Alameda Park is a mural by Diego Rivera. It is a social commentary. The wealthy could walk inside Alameda Park while the indigenous people watched from outside. Some were vendors. The police made sure that the poor stayed away from the rich.
Write a passage from the point-of-view of a wealthy person who doesn't want poor people in the park.
Then write a passage from the point-of-view of a poor person at the edge of the park, looking in, or trying to get in.
In both passages use as many of the senses as you can (smells, tastes, sounds...) and emotions!
Posted by Carmen at 10:42 AM 5 comments:

The Power of a Writing Exercise by Edie Hemingway

The topic of “writing exercises” was my idea for this round of blog posts, but now that it’s my turn, I’m having trouble narrowing down my choices of favorite exercises. When I began teaching my Misty Hill Lodge Writing Workshops four years ago, I discovered Pat Schneider’s book, WRITING ALONE AND WITH OTHERS. What a treasure trove of ideas that book has become for me! I have countless pages highlighted and marked with colored paper clips.

Just last week I used one of her exercises when teaching a writing workshop at Clear View Academy in Cleveland, NC. I asked the students to write a 5-minute autobiography and to slip in one lie (or piece of fiction). It was a great way to get to know each other, and we had fun picking out the lies. I participated, too, and included these tidbits about my life:
1. My great uncle was Ernest Hemingway, and I remember sitting on his lap while he read to me.
2. When I was twelve, I swam with flipper in the Florida Keys.
3. I’ve done many things as an adult, including teaching school, owning and operating a frozen yogurt shop, and writing three books.
Which do you think was the lie? Believe it or not, none of the students even knew who Ernest Hemingway was, so did not guess correctly. But I found that they were very subtle about slipping in their own lies, making it difficult to distinguish fact from fiction.

My middle grade novel ROAD TO TATER HILL began as an exercise to write about an event in my childhood that evoked strong emotion. I had no intention of turning that exercise into a fictional novel, but once I got to the core of those buried emotions, I could not stop writing. I did, of course, fictionalize much of it in order to make it a better story that people might want to read. I am pleased that I managed to blur those lines between fact and fiction well enough that my readers often ask me which characters are real and which are fiction.

In the writing of the book, I used two other exercises when I was stuck with where to go next. One was writing in response to music (a CD called “And The Band Played On: Music Played on the Titanic”), which turned into one of my favorite chapters in the book—Annie waltzing with Grandpa. The other exercise was putting two characters (my main character, Annie, and her best friend, Bobby) into a room together just to see what they would say the first time they meet again after an argument. The room was a barn, stacked with bales of fresh cut hay. I won’t tell you what happened, since I want you to read the book, but I will say the scene ended up as another chapter in ROAD TO TATER HILL.

An author friend of mine, Donny Bailey Seagraves, whose book GONE FROM THESE WOODS was recently released by Delacorte Press, also writes from real life experiences. However, her book was based on an event in someone else’s life. It was inspired by a story she heard many years ago about a tragedy that happened in the family of her second grade teacher. Donny carried that “real” story in her head for a very long time, then typed it on a list of story ideas and tacked it to her office bulletin board, which moved from house to house with her before she finally decided to turn it into a fictional story. Years later she visited her second grade teacher (then 90 years old) and found out that the “real” story didn’t match her fictional story. But, if you read the novel, you will see that it certainly did serve as a compelling exercise and inspiration. See http://www.donnyseagraves.com for more information. “Understanding or coping with an accidental death is seldom so directly connected to real responsibility or the need to make peace with such a mistake. Seagraves shows the best way for support to be given as well as how hard it is to forgive. These are tough topics to read about, but the book will bring up many discussions.” (excerpt from School Library Journal review)

So, don’t discount those writing exercises that teachers use to “jumpstart” their students’ creative juices or that you may use to get yourself through a case of writer’s block. Some of them may end up as published books!
Posted by Edie Hemingway at 2:08 PM 5 comments:

Here is a book trailer for Box Out I came across that I think is terrific.

Mandy Lawrence who made did an excellent job.
Posted by john at 8:59 AM 3 comments:

That's one reason I was drawn to Steve Moss' book THE WORLD'S SHORTEST STORIES. It's filled with winners from his Fifty-Five Fiction contest, which asked entrants to write an entire story in fifty-five words or less. Who knew such funny, touching, frightening, and surprising tales could be told in such few words!

Several years ago I was giving a workshop to middle school students titled "Becoming a Better Writer Through Contests." As part of the workshop I conducted my own Fifty-Five Fiction contest. The kids didn't have much time to write, perhaps fifteen minutes, but they created some wonderful stories. I gave modest prizes to the top winners, but even better was when the three winners had their stories published in an English textbook and received their own publishing contracts!

Below is one of the winners, written by a girl when she was a student at St. Anthony Middle School:

Brushing back my golden hair, I approach the beach. I notice eyes staring as I stride across the sand. Laying my towel out, I sit, absorbing the sun.

I step out of the dressing room and show Mom the suit I've selected.

Nellene's story still makes me smile. In less than fifty-five words she's painted two distinct characters and given us a glimpse of how they relate to each other.

As I told my students, entering contests with specific word limits forces you to think carefully about each word you choose. All the jingle contests I've entered over the years have proven valuable training ground for writing picture books where there's no room for superfluous language. If you're up for a challenge, give yourself fifteen minutes and see if you can write your own fifty-five word story. If nothing else, it will make you appreciate not having a word limit the next time you sit down to write!

having a successful launch party

Check out this interview at Lee & Low's blog and leave a comment. Add your ideas. Let's get a dialogue going.
Posted by Christy at 8:38 AM 2 comments:

Edie suggested we highlight a favorite writing assignment from a class taken or taught for this cycle of posts. My choices are limited. I've taken two writing classes and have taught none. My very first assignment was easy for a newbie—just write from memory for about 5–10 minutes every day for a week. There was no goal stated, so this was more about process. I'm sure you know what I learned during that time, that ideas and connections develop as you go. The process itself is magic. Below is my first little ditty:

Seed of the stone
At the tiptop of our hill I planted corn. Stairs, built from railroad ties Daddy hauled in the Studebaker, zigzagged to an area he leveled mid-way up the slope. Flanking the stairs and bordering our half-acre were stonewalls he pieced together like a jigsaw puzzle. No two stones were alike, and every last one of them came from the old quarry in Rockport on our weekly trips to Grammy’s. Tailgate down, Daddy would lift and bend, lift and bend, unloading his boyhood home to ours.

Up we went with a trowel, seeds, and a watering can. Hen-and-chicks peeked out between rocks on either side of the steps. The flowers, shrubs and trees Daddy planted were on the lower half of the hill. Everything above the flat grassy area was wild. There were no more stairs to make the climbing easy, so by the time we reached my spot we were out of breath.

From this height we could see every yard along Russell Street. The school bus driver said ours was his favorite. Across the street, to our left and right were woods. Behind us was bulldozed land, still undeveloped.

I chipped away at the dry earth making a small hole. My seeds were bright and hopeful against the dull brown dirt. I placed them carefully, covered them over and patted them. All tucked in! After watering we headed back down the hill. All summer long we repeated this climb. We must have forgotten a few times because the corn didn’t grow nearly as high as stalks by the roadside stands.

August was a good month to pick corn. That was when we made our harvest trip. A lone short stalk grew with one little ear. Silky threads hung like hair. Eagerly I peeled back the ribbed green husks. The corn was not like any I’d seen. No tidy rows of uniform kernels. Zigzagged and irregular, mine was a golden stonewall. 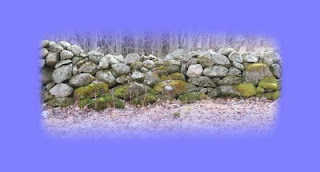 Fear is a four-letter word. Fear is a blockade, a do not enter, a caution sign; blinking red lights. It deters, procrastinates, and bullies.
I am late with this blog because I let myself be bullied by fear. It sneaks up on me, and punches me in the belly. I catch my breath, and in the absolute frustration of not knowing, I take my hardest step: putting my work out there, taking the jabs of rejection consistently, and bouncing back to receive another hit.
Sometimes I think I must be good company for fear. Fear can find a willing ally in me, one that only too easily admits the lack in my work, the lack of timing, the lack of talent, the lack of marketing skills. I think of all these things. Fear has given me a black eye and I am just about tired of being bullied.
It is about time.
Posted by betsy woods at 1:03 PM 4 comments: