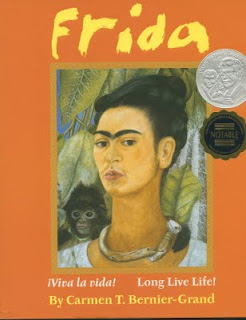 I don't consider myself a poet, but even Horn Book says I am. What am I supposed to do with this good news? (news=noticias are plural in Spanish)
This fall (while the leaves turn color and deer roam in my yard) I am learning what poetry is all about. My teacher is a fine poet, Carolyne Wright. I urge you to study her poetry books, A Change of Maps and Seasons of Mangoes and Brainfire. This poet knows Spanish, loves lizards, has lived in Chile, and has translated poems by Pablo Nerurda. I wish I could be her!
I've learned from her to count feet and stresses. But then she tells me that, in Spanish, you don't count feet or stresses but syllables. Okay, so how am I supposed to translate the poems I write in English into Spanish? It's easier the other way (Spanish into English) because you can count syllables in both languages. So, I'm sorry but after I have written poems in English counting feet and stresses, I can't translate them because the syllable thingy doesn't work. Why can't I count accents in my translations? I know well the agudas, llanas, y esdrújulas.
I will be posting my progress in poetry in English. In the meantime be aware, mis poesías en español are stressed out.
Posted by Carmen at 6:18 PM 2 comments:

The Making of a Video Book Trailer 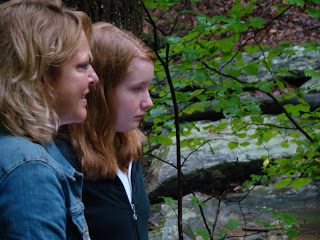 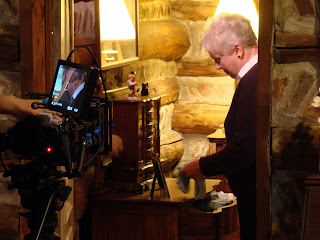 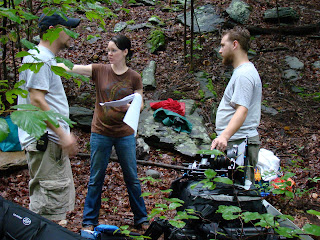 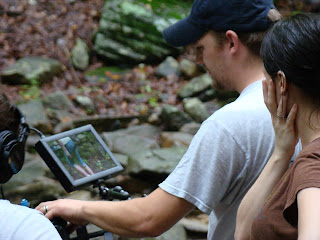 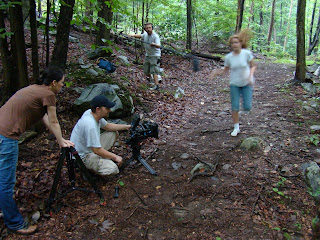 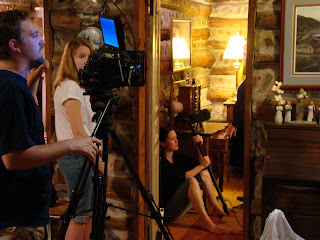 What author can resist seeing a live action scene straight from his/her brand new book? Certainly not I! So when my daughter-in-law, Mica Hemingway, who writes and produces short videos for her job as video director at Frederick Christian Fellowship, suggested we put together a video book trailer for ROAD TO TATER HILL, I was ready. Of course, I knew nothing about the process.

We had to pick the scene, which I thought should be one of the opening sequences as a teaser for the rest of the book. We had to storyboard each shot within the scene, including every action and emotion, close-up, mid-range, or more distant. We had to find the right actress to play the part of my 11-year-old main character, Annie Winters, as well as an actress for the grandmother, and one for the mysterious Miss Eliza McGee. We had to find the right clothes suitable for the 1963 timeframe. We had to find a videographer and sound technician willing to film at an affordable cost (for me). We had to find instrumental music for the background and request permission to use it. We had to find the perfect location--a mountain stream--far enough from the highway to avoid traffic noise. And we had to have good weather and just the right lighting. A tall order for a less-than-two-minute video!

One by one the pieces came together over the course of a month. Haley Eargle, the granddaughter of my good friend and fellow author, Mary Bowman-Kruhm, fit the description and cover photo of Annie Winters almost too closely to be believed. My close friend, Connie LaBrush, agreed to play the part of Grandma, grieving over the death of her newborn grandchild. (Only a very dear friend would agree to do this!) We found an instrumental version of "Wayfaring Stranger" played on the mountain dulcimer by musician Larry Conger, who agreed to allow us to use it. And we found a rushing mountain stream in Cunningham Falls State Park.

John Saunders and his brother, Alan Saunders, of The Connectivity Group agreed to meet us at Cunningham Falls on Friday, August 28th to do the filming. Mica had the storyboard put together so tightly that it didn't take long to talk Haley through each scene.

The weather, however, did not cooperate. We were caught in an initial downpour while scouting out a site, and waited out a second downpour. Finally it cleared, and we moved quickly to start filming--that is, as quickly as you can while carrying heavy camera equipment nearly half a mile along a slippery, uneven trail and setting up a track for the camera to move smoothly in and out for close-ups and long shots.

Haley was a trooper, running through scenes time and again, so they could be shot at different angles and perspectives. Another storm threatened, thunder rumbled, and the light grew dimmer. Just as John and Alan set up the camera track, stretched between two boulders in the water to film the most dramatic scene of "Annie" throwing rocks into the creek and discovering the "rock baby," the sky opened and rain fell in sheets. They kept filming. No need for artificial tears or emotions. Haley, now drenched, flung rocks into the creek with vicious strength and shivered from the cold until she could finally make the trek back to the cars and wrap up in a fleece blanket.

And still we weren't finished! The opening scene inside Grandma and Grandpa's house still had to be filmed, and everyone had to be clean and dry, since it was being done out of sequence. I won't bore you with more details, but I do want to say that there is far more to film production than I was aware, and this narrative hasn't even included the editing portion, and adding voice over and music. Mica's biggest job is to seamlessly blend the scenes with the added, unplanned difficulty of transitioning from no rain to a downpour.

I am indebted to Haley for her uncomplaining perseverance! Her debut film appearance was certainly not glamorous and probably something she won't want to repeat. I'm sure she was happy to go back to being a 7th grader. I am also indebted to John and Alan Saunders for squeezing this project into their busy schedules and for sticking with it through more-than-difficult circumstances. And, to Mica, my incredibly talented and loyal daughter-in-law, thank you for your faith in my story and your countless hours of work to produce this trailer!

To the readers of our blog--I'll post a link to the video once it's available!
Posted by Edie Hemingway at 2:47 PM 11 comments: