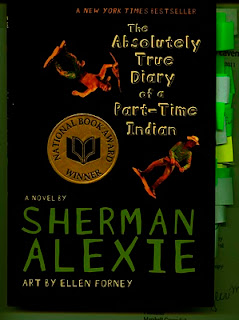 Or is it work while reading?

I have been blessed with my free-lance writing job, and my jobs teaching at Writers in the Schools and at the Whidbey Island Workshop. These jobs require me to read.

I read for work!


Sherman Alexie's The Absolutely True Diary of a Part-Time Indian is in the list. I find it an honest book, a book with a message for all of us. But also a book that every writer should read because of the proportions between authentic dialogue and authentic descriptions, believable characterization, and humor that ends up into us being serious.

I'm telling you, I am blessed because of all of you who write books.
Posted by Carmen at 6:24 PM 6 comments:

Of the books I read this summer, here are my favorites:

I came across WILDTHORN by Jane Eagland as I prepared for a talk I'm giving in Hayward, WI this Friday about including Gay/Lesbian/Bisexual/Transgender books for young adults in your public/school library. A 17-year-old girl in Victorian England dreams of someday becoming a doctor, but finds herself imprisoned in an asylum for the insane instead. Slowly she discovers why she was sent there, and desperately plans an escape. Both harrowing, and eventually hopeful.

Another outstanding historical fiction book for young adults was Katherine Sturtevant's THE BROTHERS STORY. Set during the Great Frost of 1683, 15-year-old Kit escapes to London to find a better life for himself, even though it means leaving behind his simple-minded twin brother. It isn't a book I would have picked up on my own (the cover doesn't do it justice) but thankfully I was given it as a gift, and the rich details of the time 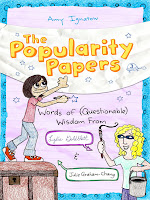 pt me fascinated as Kit discovers what is most meaningful to him.

Finally THE POPULARITY PAPERS by Amy Ignatow is a hilarious book describing two fifth grade girls' attempt to become popular. I found it a kinder and funnier DIARY OF A WIMPY KID-type book. As a side note, one of the girls just happens to live with two dads, which is dealt with very matter-of-factly. If you know any middle grade girls (or even middle-aged men), they will eat this up.
Posted by David LaRochelle at 7:57 PM 6 comments:

The Shakespeare Manuscript
by Stewart Buettner
What would happen if a new play by Shakespeare was discovered? This is a page-turner for mystery fans and theater buffs, and particularly meaningful for me was that the book was written by my college art history professor. I read it on trains as we traveled up and down the UK this summer. I was so engrossed I had to remind myself to look out the window every now and then to catch the landscape. This was published as an e-book/print on demand title.

Caller Number Nine
by Debbie Duncan
Set in 1967, this middle grade novel harkens back to the author's own experience at age 13, when she repeatedly dialed the local radio station on her pink princess phone. Duncan really did win a trip for two to Hawaii with a D.J. heartthrob. Debbie is in my writers group and I'm thrilled to see how she created a completely new character and introduced many of the issues in the 60s: Vietnam, feminism, and civil rights. Caller Number Nine is recently published as an e-book and I designed the cover and various interior elements. I even wrestled with Smashwords conversion.

The Memory Keeper's Daughter
by Kim Edwards
I'm working on my own middle grade with a theme of family secrets, so I was drawn to this title. During a severe winter storm, a doctor must deliver his own twin babies. His wife is heavily sedated. Their son is healthy, but their daughter is born with Down syndrome. The doctor attempts to spare his wife the heartache of caring for a special needs child, and tells her their daughter died at birth. He orders the nurse to place the girl in an institution, however the nurse secretly decides to raise the baby girl as her own in another city. The two families live in stark contrast to each other as years pass. I loved this book and it reinforced my own experience that family secrets have consequences.

Cutting for Stone
by Abraham Verghese
Here's another book with a similar theme. Twin brothers are born of a secret union between an Indian nun and a British surgeon. Orphaned by their mother's death and their father's disappearance, they are bound by an extraordinary connection and both share a fascination with medicine. The story is set in Ethiopia on the brink of revolution. I was also intrigued to learn that the author lives here in Palo Alto. He is both a doctor and accomplished writer, having taken a time out of his medical career to attend the Iowa Writer's Workshop. The writing is beautiful.
Posted by Christy at 10:52 PM 7 comments:

So many books, so little time...

I'm often asked, "What would you tell someone who wants to be a writer?" And the first thing out of my mouth is, "They should read. A lot." I find that I'm most productive in my writing when I'm also reading. And this summer, I read a lot. Several of the books were YA novels in series, follow-ups to the first or second books. I'm not going to mention the titles because I was disappointed. But so many of the books I read were so great. I'll start with one I just finished the other night. ( Technically, fall doesn't start for another week or so, right?)

Those Across the River by Christopher Buehlman. Wow. I still can't get this one out of my head. Set a few years after WWI, failed academic Frank Nichols and his wife arrive in a small town in Georgia, which has some serious secrets. A reviewer called it "As much F. Scott Fitzgerald as Dean Koontz."

Another one I highly recommend is The Night Circus by Erin Morgenstern. "The circus arrives with no warning. No announcements precede it, no paper notices plastered on lamposts and billboards. It is simply there, when yesterday it was not..."

Miss Peregrine's Home for Peculiar Children was another I thoroughly enjoyed. A mysterious island, an abandoned orphanage, a strange collection of odd photographs...

And my last recommendation:

Where Things Come Back by John Corey Whaley was one of my favorite YA reads of the summer.

In the summer before Cullen Witter's senior year, a birdwatcher in the small Arkansas town claims to have seem a bird declared extinct in the 1940's. Amid all the hubbub, Cullen's beloved younger brother disappears.

It was hard to narrow all my summer reads down to just this list, but they are terrific and I think you'll enjoy them as much as I did.