Another advantage of technology 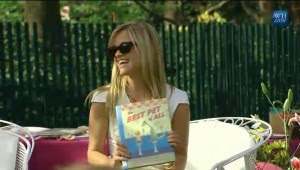 Like Edie, I use Google Alerts to give me the "heads up" if someone on the Internet posts a comment about me or one of my books. It can alert me to an award nomination that even my editor doesn't know about, or it can bring me to a review that unequivocally states "this is the most boring book ever written."

Just recently a message from Google Alerts sent me a link to an article which included the White House in its caption. Was one of my books being questioned as unAmerican? Not at all! When I followed the link, I discovered my picture book The Best Pet of All had been read on the White House lawn at Easter by actress Reese Witherspoon! Okay, I had to have a friend explain to me exactly who Reese Witherspoon was, but I thought it was still way cool!

To hear Reese (I'm on a first name basis with her now) reading my book, you can check out this YouTube video.

Thank you, technology, for bringing me this news that would have otherwise slipped under my radar.
Posted by David LaRochelle at 7:47 PM 7 comments:

I used to spend weekend afternoons at the library researching and reading. Nowadays I use the Internet, though I still take biweekly trips to the library with my son to check out books (literally and figuratively).

If I wanted to buy a rare title, I used to contact a local bookstore and have them do a search; a week or two later I would hear if they had found one and, if so, begin the process of ordering it. Nowadays I type the title into Bookfinder, order the copy I want, and a week or two later it arrives in my mailbox!

I used to write letters to my grandparents and uncle in England; about a month later I would receive their reply. Nowadays I attach a few pictures to an email, press ‘send,” and within minutes I have a reply!

I used to post flyers at bookstores and cafes seeking people to start a critique group. Nowadays my local SCBWI has a gal whose sole function is to match people to groups (via email, of course!).

I used to type stories on an old manual typewriter with sticky keys. Then, in college, I bought a fancy electric typewriter. After college I bought a bulky “word processor” that weighed about 20 pounds. A few years later, I bought a smaller version of the same word processor. About 15 years ago, I bought a Compaq Presario, an “entry level” computer. Since then I have written on various cheaper and faster versions of desktop or laptop computers.

I used to seek out books and seminars on writing. Nowadays I read websites and blogs, and even post to our own blog!

I used to package submissions in a manila envelope with a SASE, send it off, and wait a few months (or more) for a reply. Nowadays – hold on a second: that’s what I still do!
Posted by Mark at 6:47 AM 8 comments: