Conferences: To go or not to go...

I have time for just a quick post on my way to the NCTE (National Council of Teachers of English) Conference/Convention in Orlando, FL to present a roundtable discussion along with fellow authors from the Class of 2K9 on the topic of "The Other Happily Ever After: A Retooling of the Female Hero's Journey." It has only been in the last few years that I have become a presenter at some conferences, rather than an attendee, and even more recently I've become an organizer of conferences now that I am Regional Advisor for the MD/DE/WV chapter of SCBWI. The last two roles present a lot more stress and advance preparation, but my main focus and hope remains the same: to make and renew connections with fellow writers and to give and receive inspiration to keep writing.

Probably my favorite and most productive conference that I attended was during the summer of 2006 when I submitted 10 pages of my manuscript in progress for a 15 minute one-on-one critique with an editor. That 15 minutes with Michelle Poploff, VP and Executive Editor of Delacorte Press, eventually led to the contract for my middle grade novel, ROAD TO TATER HILL. And at a conference during the summer of 2010, Michelle Poploff and I gave a joint presentation on our author/editor revision process.

Attending conferences is expensive during these difficult economic times. I suggest first researching topics and speakers and looking for some "hands-on" craft-oriented sessions, before registering. Go to the conference with an open mind, not expecting a miracle, but definitely expecting to make new connections with other writers and illustrators, to gain some practical advice, and to go home inspired to persevere. If you're lucky, you may even have one of those "aha" moments that will provide a breakthrough in your career!
Posted by Edie Hemingway at 5:53 AM 2 comments:

My experience with electronic books is so extremely limited that I have guts even writing this. I know I've avoided the subject as it seemed to be in such opposition to the experience of a story. When I read a book, it is tactile. I feel the pages, and turn them and many times wander ahead in the story to return to an earlier part. The experience of falling into a book, is entering a world, finding myself inside of it and turning page after page.
Yet, the kindling world recent broke through my clear attachment to the traditional book form. I was at lunch with a friend sitting at a marble oyster bar and next to me was an almost elderly gentleman, enjoying his po-boy with an electronic book set up on a stand. It displayed two pages at at a time, and he could eat and read rather effortlessly. I became interested and we shared a conversation. He still loves books, real books, books with pages and covers that hold that paper and ink scent, yet, especially when he travels, the electronic book becomes a friend.
I get this, and may eventually get one, but find my thoughts meandering back to ancient words found on salt tablets and papyrus, the printing press, and how the future filled with words always presses on expressing as our technologies evolve.
Posted by betsy woods at 11:09 AM 2 comments:

It has been a long time

Well, I'm here to catch up after an amazing trip researching Picasso in France, Spain, and Connecticut.

In France I visited most of the place where he lived near the Mediterranean: From Cadaqués (very much the same as he painted it) to Nimes (Roman bullfight ring), to Nice where my husband and I stayed a few days, driving every day to towns such as Antibes (where he learned to do ceramics) and Mougins where he died. On our way back we drove to Aix-Provence where he and his second wife, Jacqueline, are buried, then through the gorgeous Pyrenees to visit Gósol where he spent a summer. He chose his places well!

In Barcelona we visited Picasso's museum and we have photos of the places he lived and worked. We ate a couple of times at Els Quatre Gats where he often got together with friends.

Málaga is the city that celebrates him the most. His natal house is a museum and there is a museum with his childhood paintings and paintings that his first wife Olga kept. The day of his birthday, October 25, my husband accidentally--luckily--took an alleyway. The media was there and who comes out but Bernard Ruiz-Picasso. I got to shake hands with Pablo Picasso's grandson!

Back home--not quite but in Connecticut--I visited Yale's Bierneke Library and had in my hands original letters and postcards written by Picasso!

I'm sure you can feel how pleased I am!

My comments on picture books: Because of the pictures, they are a form that English learners can understand and learn the language. If they don't get the written word, they look at the pictures to get it. For that reason and many others picture books must live!

My comments on e-books: They are another way to read. Some people read better on paper, others don't. And it is easier to travel with a Kindle than to travel with many books.

Am I covering everything I've missed? Who knows? But for those of you who don't like to read long posts, this is enough.
Posted by Carmen at 9:15 AM 5 comments:

THE BEST puPET theater OF ALL! 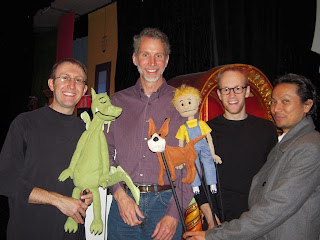 Pardon me for posting off-topic, but I wanted to share the wonderful experience I had in Kansas City, Missouri last week. Last spring I was contacted by the Paul Mesner Puppet Theater who was interested in producing my picture book The Best Pet of All for their November production. My publisher was able to work out all the legal formalities, and last week I flew down to watch the opening night premiere.

It was wonderful! In the morning I saw two performances, one sitting with an audience of 200 preschool-second graders who roared with laughter, and one sitting behind the scenes watching two puppeteers scurrying about as they worked their magic. In the evening I watched a performance attended mainly by adult donors then signed books afterwards.

I was especially curious as to how they would take my 500-word story (which takes about five minutes to read) and turn it into a 50-minute production. They did so by paying close attention to the illustrator Hanako Wakiyama's artwork and turning small details into full scenes. For example on the first page of the book the boy asks his mom for a dog and she says, "No, dogs are too messy." Hanako painted the mom working out to a television exercise show. The puppeteers picked up on this detail and created an entire scene where the mom is working out to a TV show called Davy Jones' Fitness Locker: "Alright Ladies, it's time to do those Capt'n Crunches!" It was hilarious. They fleshed out other scenes in a similar way.

It was exciting to see my story come to life in this new way and I'm very grateful for everyone at Paul Mesner Puppets for the care they took with my book. Once again I'm reminded of how our books have a life of their own.
Posted by David LaRochelle at 6:21 PM 5 comments:

This round of posts we're talking about conferences—their value, which we've attended, and which ones we would recommend. In fact, I've never enrolled in a conference, but have only attended conferences where I've been a keynote speaker, break-out session presenter, or on a panel—SCBWI Conferences, the Charlotte Huck Festival, California Reading Association, CCBC biennial, Mazza Museum of International Art from Picture Books Fall Weekend, Reading the World, and several others. Many use the conference as an introduction to attending editors. There is often a policy that allows submissions (at houses where submissions are not usually open) for a period of time after the conference. Perhaps because I worked in-house at several publishers in NYC, this has not been my own strategy or intent. Conferences provide rare times to draw creators out of their caves to connect with others. For me conferences are about community and inspiration. I love hearing other writers and illustrators describe the backdrop and development process of their stories. Speaking at conferences gave me the opportunity to meet fellow potatoes Stephanie and Edie. Stephanie and I are pictured below at the Charlotte Huck Festival many years ago. Which one of you will I meet next? 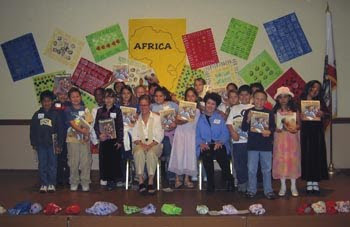