Ten Fast Facts About Betsy Woods
#1. I live at Camellia Farm on 18 acres that sit in the curve of Bayou Liberty on the edge of the Honey Island Swamp just outside of New Orleans.
#2. I can’t not write. Truly, I can't not write, it's impossible.
#3. I am the editor of The Children’s Corner for The Louisville Review and get to publish young people from across the nation.
#4. I’m the writer-in-residence in schools in the New Orleans area. I also teach creative writing at The Writer's Loft at Middle Tennessee State University.
#5. I have three cool sons. They each have their own dogs. One is named Daisy, one is named Sammy, and one is named Scout. They like to take their flatboat out on the bayou and the Pearl River where they catch crawfish and feed alligators marshmallows (my sons, not the dogs). We all survived Hurricane Katrina, though our old home did not.
#6. I grow tomatoes, and have a dog named Gracie.
#7. I wrote, produced and directed a play titled Santa Claus on the Moon when I was nine years old. I did.
#8. Gumbo is my favorite food. What’s gumbo, you ask? Gumbo is a dark stew made with shrimp and crab and oysters and a little bit of everything else.
#9. I play the guitar on my front porch when no one is around. If you spy on me, you might catch me turn a tune.

#10. I have written two young adult novels, Strong Moon Tonight and The Alfalfa and the Omega. I written one picture book titled Miss Smackbottom Lives Three Doors Down. They are all looking for a publishing home. I've published short stories for adults in national literary magazines like The Louisville Review, The New Orleans Review, The Literary Trunk and Alive Now. I was the winner of the 2004 Writer’s Project National Fiction Contest. I’m a contributing writer for Sophisticated Woman magazine, was a columnist and feature writer for The Times Picayune (the greater New Orleans newspaper) and for many years served as the assistant editor of Acres USA, the largest organic farming journal in North America. I’ve presented papers at the International Conference for The Children’s Literature Association. I have an MFA in writing from Spalding University.

I have always been a late. Not late to appointments. If you had me over for tea, I would arrive on time, but I am always late when it comes to growing up. I am a late bloomer. And this blog is something I have to grow up for. It is a new way of communicating for me, so I ask for you patience. So here I am, the "Late Potato" adding ten things you should know about me:
Posted by Lauren at 6:47 AM 3 comments:

1. I am going to my garden today to dig up this year's crop of purple potatoes.
2. I love basketball. Yes, really love.
3.  I live in Minnesota, spend time in New York, and have been to fifty states.
4. I have written five picture books, two YA novels, and am in the middle of a four book series. The first book in the series called Top of the Order will be published in March of 2009.
5.  I recently found out that some middle school librarians will not allow my YA novel BOX OUT in their libraries for a reason that surprised me. You can read about it here: http://asifnews.blogspot.com
6. I wrote a book called Two Old Potatoes and Me that has great illustrations by Carolyn Fisher. You can see pictures of spuds growing, vote for your favorite way to eat them, and other potato fun at: www.johncoy.com/pages/picbooks/potatoes/index.html
7. My first picture book, Night Driving, was published in 1996.
8. I'm pleased to be connected to these other writers and illustrators on this blog.
9. I feel very fortunate to do what I do.
10. I really want to see David LaRochelle's video about how good Serokat laxative makes him feel. On this blog.
Posted by john at 10:37 AM 4 comments: 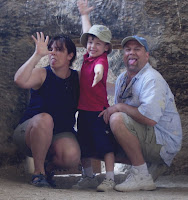 First, thanks to Stephanie for inviting me to be a member of such an illustrious group of writers/illustrators, and for setting up this blog.

I grew up in Fairbanks, Alaska, but currently reside in the hills west of Olympia, Washington. Until a few months ago I worked as a mental health therapist for children and families. Nowadays I’m (blissfully) “retired.” That means more time to write, read, visit National Parks, sail, wrestle our son, and wash the dishes. I also collect bookmarks and rejection slips.

My middle grade novel, Angus (about a pika trying to escape global warming), is currently making the rounds of agents and editors. Meanwhile I’m working on a new novel about a boy who starts a gold rush . . .

Glad to be onboard!
Posted by Mark at 8:43 AM No comments: