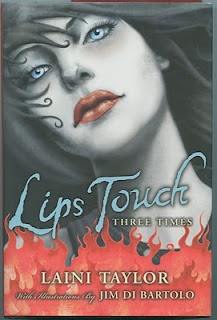 Young ladies doubt themselves too much. Looking back I know I did.

"They leaned against the locker and watched the new boy out of sight. Just as he rounded the far corner with Saint Pock Mark, he glanced back over his shoulder. A thrill went through Kizzy. She imagined for a second that his eyes had silvered like a cat's. And she imagine he had looked right at her. She blushed instantly, even though she was sure she was wrong. Boy's eyes didn't find her in a crowd. Boy's eyes didn't even find when there was no one around. They sort of glanced over or fixed on some fascinating object in the distance."

This Valentine believe that somebody is looking at you in admiration.
Posted by Carmen at 9:45 AM 3 comments: 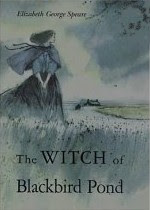 Like Stephanie, I am looking back to one of my favorite childhood books for my "literary" love match. THE WITCH OF BLACKBIRD POND, by Elizabeth George Speare, was published in 1958 and won the Newbery medal in 1959. I read and loved it in the early 60s, and it's also my character Annie Winter's favorite book in ROAD TO TATER HILL. Last summer, while working on my screenplay of RTTH, I reread THE WITCH OF BLACKBIRD POND and was not disappointed these many years later! My first edition copy of the book is a bit worse for wear--in fact it survived a fire in my grandparents' home back in 1975. The bookjacket was singed, and the book itself still smells of smoke.

The 16-year-old heroine, Kit Tyler, has traveled from Barbados to the Connecticut Colony in 1687 aboard the Brigantine "Dolphin." On the first page, we meet both Kit and Nathaniel (Nat) Eaton, the captain's son. "She had noticed him often, his thin wiry figure swinging easily hand over hand up the rigging, his sandy, sun-bleached head bent over a coil of rope."

I don't want to give away the entire story because I hope you'll read it. But, suffice it to say, Kit, with her untamed spirit, challenges the puritan ways, defies social norms, befriends an outcast Quaker woman (Hannah the so-called witch), and teaches a young girl to read. When Kit is ultimately tried as a "witch" herself, Nat comes to her rescue. "For the first time she dared to look back at Nat Eaton where he stood near the door. Across the room their eyes met, and suddenly it was as though he had thrown a line straight into her reaching hands. She could feel the pull of it, and over its taut span strength flowed into her, warm and sustaining." (p. 220)

But Nat has been banished from the village, himself, and slips away as soon as Kit is acquitted. Will he return? Will Kit come to terms with the puritan ways and continue to live in the village of Wethersfield, or will she return to Barbados where she was raised? That's for you to find out... 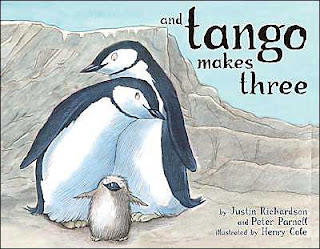 My vote for favorite literary couple is another nontraditional animal pairing. In AND TANGO MAKES THREE, Roy and Silo, two male penguins, build a nest together and in vain try to hatch an egg. When an observant zookeeper notices a nest with an extra egg, he places it in Roy and Silo's nest, and the two hatch a baby penguin of their own. Based on an actual incident, it's a story about families and diversity. It's also a story that I wish had been available to me when I was growing up.
Posted by David LaRochelle at 8:56 PM 4 comments:

I'm in the moose for love 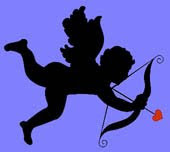 Mischievous cupid is blind to race and creed, and apparently to species too! I was trying to think of examples of romance in picture books, and then remembered a book I worked on in my earliest publishing job, A Moose for Jessica by Pat A. Wakefield, with photographs by Larry Carrara (Dutton, 1987). It is the true story of a moose named Josh who came out of the Vermont woods and fell in love with a Hereford cow named Jessica. The romance lasted for 76 days and is wonderfully documented in this photo-essay.
Posted by Christy at 8:16 AM 5 comments:

With Valentine's Day around the corner, love is in the air. And here at One Potato Ten, we're all going with some literary love. I've chosen to reveal my favorite love match. Granted, this is an oldie but a goodie. A classic love match, I think, and perhaps the first I can ever remember reading. My favorite couple is from a Newbery winner. 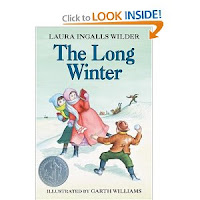 What kind of a man was Almanzo? A handsome outlaw. "What?" you say, "An outlaw?"

Here's the proof: He went West at age 19. You could only get a homestead claim if you were 21, but he got one anyway.

Yes, Almanzo was a bad boy. And who can resist a bad boy?

Certainly not Laura Ingalls! Especially during the long, blizzard-plagued winter that left them all hungry and , when the trains couldn't make it with supplies, wondering if they'd last until spring. Check it out:

Pa had come quietly into the kitchen and without a word he laid his shotgun on its hooks. No one said anything; there was no need to. Carrie sighed. There would be no venison, no gravy on the brown bread.

So as the people in town were starving, Almanzo and his brother made trips between blizzards to get hay for people to burn in order to stay warm. And then they discovered that 18 miles south of town a settler had a supply of wheat. That was much too far with blizzards coming, but Almanzo refused to let the people in town starve.

So Almanzo and Cap Garland manned up and headed out. While back at the Ingalls' house there was some pining:

All day, while Laura turned the coffee mill or twisted hay, she remembered that Cap Garland and the younger Wilder brother were driving across the track-less snow fields, going in search of wheat to bring to town.

And then a four day blizzard set in.

All the days of that blizzard, nothing more was said about Cap Garland and the younger Wilder brother. If they had found shelter, they might live through the storm. If not, nothing could be done for them.

The romance was almost over before it started!

But they made it, barely, and gave the wheat to the shop keeper, who then decided to fleece the townspeople. But Almanzo wasn't down with that and talked the price down so Laura's Pa could buy some.

And yes, even though there were no lip locks or dating for Laura and Almanzo over that long winter, the seed was planted...