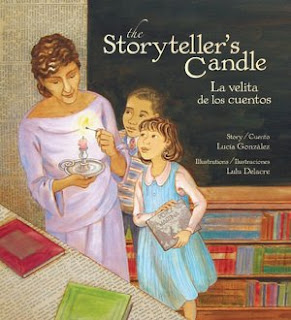 Pura Belpré was the first Latina librarian at the New York Public Library. When she became a librarian, she saw the need for books for Latinos. She began telling children the Puerto Rican stories she knew. Some of those got published.
The Story's Teller's Candle written by Lucía González and illustrated by Lulu Delacré is about her, and it won a Pura Belpré award.

The Pura Belpré Award, established in 1996, is presented annually to a Latino/Latina writer and illustrator whose work best portrays, affirms, and celebrates the Latino cultural experience in an outstanding work of literature for children and youth. It is co-sponsored by the Association for Library Service to Children (ALSC), a division of the American Library Association (ALA), and REFORMA, the National Association to Promote Library and Information Services to Latinos and the Spanish-Speaking, an ALA affiliate.

My congratulations to the Latinos who won this year Pura Belpré awards:

2012 Author Award Winner
Under the Mesquite, by Guadalupe Garcia McCall, published by Lee and Low Books Inc.
In “Under the Mesquite,” Garcia McCall, writing in emotionally riveting free verse, gracefully manages to convey the experience of growing up in a bicultural community in Texas with geographical accuracy and a radiating authentic voice for its main protagonist fourteen-year-old Lupita, the oldest of eight children who is dealing with her mother’s terminal illness.
“Garcia McCall deftly communicates not only the experience of a youth losing her mother to cancer but that of a child surrounded by siblings embracing and discarding their Mexican roots in various degrees,” said Naidoo.

2012 Author Honor Books
Hurricane Dancers: The First Caribbean Pirate Shipwreck by Margarita Engle, published by Henry Holt and Company, LLC.
Engle’s beautifully written poetic narrative cuts to the heart of an untold story in Latin American history and describes the enslavement of the native peoples of the Caribbean by the Spanish along with the mixing of Spanish and native blood that now forms the vast majority of Latin America. Told from several points of view, the story captures the rhythm and sounds from a time long ago and encourages readers to explore Latino culture on their own.


Maximilian and the Mystery of the Guardian Angel: A Bilingual Lucha Libre Thriller written by Xavier Garza, published by Cinco Puntos Press.
Xavier Garza successfully captures the excitement that Max, an eleven-year-old Mexican-American boy, displays when he discovers that his favorite Lucha Libre wrestler is coming to town and might have a strange connection with his own family! This action packed bilingual mystery novel uses playful language that reinforces elements of Mexican-American culture and overflows with almost unbridled excitement for Lucha wrestling.

2012 Illustrator Honor Books
The Cazuela that the Farm Maiden Stirred illustrated by Rafael López, written by Samantha R. Vamos, and published by Charlesbridge.
Nothing is better than a delicious bowl of arroz con leche unless, of course, a host of farm animals have a hand in the preparation! Lopez’s blazing illustrations for the rhythmic, rollicking cumulative tale, “The Cazuela that the Farm Maiden Stirred” radiate a cheerful exuberance and are peppered with Latino cultural details that extend Vamos’ perky narrative. 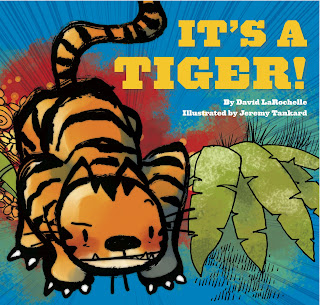 I know that we are supposed to be blogging about book awards for this round, but I just received the final artwork for my new book, IT'S A TIGER! and wanted to share it. Jeremy Tankard's digital illustrations are so dynamic, colorful, and vibrant. I am very, very pleased! I originally sent an illustrated dummy of the book along with my manuscript when I sent it off to the editor, so I had a pretty strong idea in my head what I thought the images should look like. Now that I've seen Jeremy's terrific artwork, I can't picture it any other way.

The hard part will be waiting till this summer when the book is officially released.
Posted by David LaRochelle at 7:59 PM 8 comments:

If Meryl Streep Won a Newbery....

What a flurry of activity in news reports the past few days! As a lover of both books and movies, having the ALA Youth Media Awards announced yesterday, and then the Academy Awards nominations today, well...it's been exciting.
The Newbery and Caldecott are often referred to as the Academy Award of children's literature. In some ways, that is quite appropriate. These awards are absolutely the most prestigious among children's literature, like the Oscar is in the movie world, and having one of those stickers on your book will make you an instant success, much like an Oscar will just about assure you a nice career in acting. But there are a few differences....
The Oscars are voted on by the entire Academy, which numbers somewhere around 6000. The Newbery and Caldecott have a slightly smaller votership: usually a committee around a dozen or so. Can you imagine if the Newbery and Caldecott were voted on by 6000 librarians? Hmmmm. Fun to think about, isn't it?
What if it were the opposite? What if the Academy Awards were chosen by a committee of about a dozen people? They would get to watch all the movies and narrow it down to a winner, with maybe one or two or three runners up, an arbitrary decision, depending on the year and the committee.
I suspect this would lead to a lot of hub-bub about who got left out or should have been nominated...Oh wait. That happens even WITH 6000 voters. I guess that's one more reason the Newbery and Caldecott are like the Academy Awards: you will never make everyone happy.
( As an aside, three movies adapted from books I loved are all up for Best Picture: Hugo, The Descendants, and Extremely Loud and Incredibly Close. Maybe books are taking over the movies...)
Posted by Stephanie at 8:15 AM 4 comments: