When I was little the stories that stole my heart and imagination every time I read them were orphan tales. Maybe it was because I was the middle child in my family? Or maybe it was because in orphan stories, the orphan turned into a princess or suddenly found themselves the long lost nephew or niece of a wealthy Lord or Lady. Orphans had all the luck! For Halloween, I would dress as Sara Crewe in A Little Princess by Frances Hodgson Burnett. 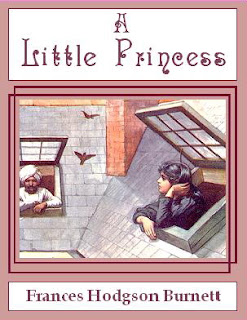 Oh, how I swooned for Sara when news came that her Captain Father was lost in the war. Suddenly her high status at the girl's boarding school was lost and she moves in with the servant girl to the ancient, cold attic. Sara is not daunted by this mistreatment and even finds clever ways to play tricks on the spoiled rich girls who treat her haughtily. In fact her story-telling and imagination keeps her and her servant-girl friend warm through cold winter nights. Sara's early life in India makes her polite and friendly to the Indian servant in the building across from the school. Soon warm soups, cakes, and fruits fill the attic for the two girls, along with a monkey. I love secrets and surprises in stories and A Little Princess has them in abundance. 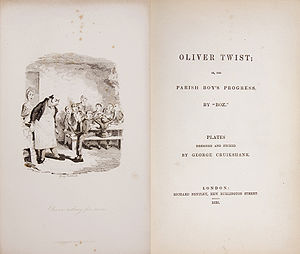 But since this is Halloween when one dresses up and goes door to door asking for treats, I think I would dress up like my other favorite orphan, Oliver Twist. After reading this book I insisted my mom make me gruel for breakfast every the morning. She had no idea what gruel was, but satisfied me with a bowl of hot oatmeal. As Oliver Twist, I would carry an empty bowl from door to door, ring the doorbell and say: Please sir, may I have some more?
Posted by Lauren at 2:02 PM 5 comments:

An Average Kid Having Unexpected Adventures

Which favorite literary character would I dress as for Halloween?  This was a tougher question than I anticipated.  I spent about half an hour this morning standing in front of my bookcase perusing titles and pondering possibilities before I finally decided upon a character I have loved since first reading about his adventures while I was in elementary school.  His name?  Henry Reed. 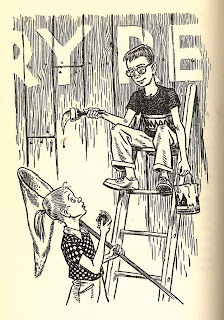 Henry starred in five books, each of which concerned his (mis)adventures while spending summer vacations with his aunt and uncle in Grover’s Corner, New Jersey.  Along with his friend Margaret “Midge” Glass (the only kid his age who lives in the neighborhood), Henry finds himself involved in many humorous incidents, most of which result from complications arising from his efforts to earn money via various business enterprises.  Whether it’s working as researchers, babysitters, or theatrical managers, Henry and Midge continually find themselves in situations that spiral out of control.  All the while, Henry narrates his adventures in a plain-spoken and understated manner that adds to the humor of the books.

I reread all five of Henry’s adventures this summer.  Doing so reminded me why I loved them so much as a kid.  Much like Beverly Cleary’s Henry Huggins, Henry Reed is just an “average” kid that finds himself embroiled in hilarious adventures.  No magic, no special powers, just a curious and creative kid getting into and out of trouble.

I know this much: If I could dress as Henry Reed for Halloween, I’m not sure what would happen but I am sure it would involve an unexpected adventure.  And it would be funny to boot!
Posted by Mark at 4:31 PM 8 comments: