Am I a Hidden Jew? 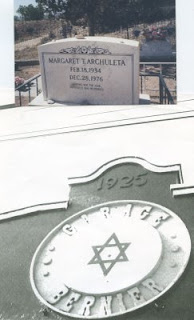 Some years ago my sister and I revisited Coamo, Puerto Rico, the town where most of the Bernier, including us, were born. We stopped cold at a building my grandfather had built. "Do you see what I see?" I asked my sister. Both of us had been interested in Sephardic music and the history of the Spanish Jews. And up there in that building was the Star of David! Could it be that we had Jewish ancestors and we didn't know it?

My grandfather was a Freemason, so we always thought that was the reason his casket wasn't allowed in the Catholic Church. The Church had announced that any parishioner who went to his funeral would be excommunicated. Later they dropped that because the whole town went to his funeral.

I hear the Satr of David is a Freemason's symbol as well as others. Still, I prefer to write a story in which a devout Catholic girl named Margaret finds out that her grandfather, who pretends to be Catholic, is really a Jew. So, I have been collecting information, not so much about Margaret, because I know what it's like to be a ten-year-old Catholic, but about her grandfather, Salomon Archuleta (Chuleta is the Spanish for pork chop).

I have a board with my Jewish neighbor's photo. His looks, beard and all, will be Archuleta's. The board also has photos of a spiral stairway to a Catholic pulpit which Margaret will learn to hate and a Catholic New Mexico cemetery that has a tomb with a stone on top--a Jewish tradition. At the center of the Easter lily there is Star of David.

Margaret, begins to suspect that something is wrong when on a Friday evening she and her girlfriends (who have done this for a while) peek by his ajar window and see Archuleta, towel on head, lighting candles and bowing.

She suspects but denies that her grandfather is a Jew, after all they tell her that the Archuleta's are not Jews. Oh! But his mother, Miriam Trujillo was! Women carry the Jewish tradition.
Posted by Carmen at 9:50 AM 3 comments: 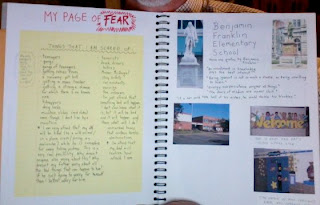 Last summer I heard a wonderful presentation by the talented children's author and illustrator Debra Frasier. She showed us that in preparation for a new book, she creates a journal on that book's theme. Her journals are filled with sketches, jottings, photos, and anything she finds that might relate to her future book. Her presentation excited and inspired everyone in attendance.

The next day I bought a large artist's sketchbook and began a journal for the middle grade novel I'm writing. In the journal I've included photos of the type of pet my character has, lists of things my character fears, and thoughts that my character might have on a wide range of topics. I've also pasted pictures from magazines and the Internet that relate to my character's family and school. This journal has given me insights that I would have never discovered otherwise, and has provided me with specific details that I can use in describing both the setting and other characters. I have found it to be an excellent way to help develop both the story and character.
Posted by David LaRochelle at 8:08 PM 4 comments:

Get into the act 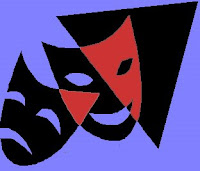 Not only do I make faces in the mirror to study the way to illustrate convincing emotions, I actually develop sore muscles from maintaining various expressions the whole time I’m drawing or painting. I’m usually not aware of it until I hurt, but it’s a habit I can’t stop. I become my characters! I act out their movements too.

It was not surprising at a SCBWI workshop, that acting was recommended as a great way to help writers develop their characters. Presenters Caryn Yaciwitz and Betsy Franco (mother of actor James Franco—Freaks and Geeks, Spiderman, Milk) were taking acting classes through Stanford Continuing Education. They claimed the experience totally transformed the way they wrote. At the workshop we partnered up and acted out scenes provided. Taking on a character’s motivations, thoughts and feelings then, physically walking through a scene, was a telling way to discover what might come across as true or false.

Favorite stories provided the themes of our recreation when I was young. Friends and I took turns at being a hero/heroine and the remaining cast of a book. The author’s story then took on life unimagined and new chapters unfolded. This sense of play and discovery is at the heart of what we do when we bring life to the page through image and word. Perhaps we each might benefit by turning our writing groups into improvisational troupes!

For me, creating a character in a novel is much like meeting a new friend. At first you only know what they look like. Tall or short, pudgy or skinny, smiley or morose. When I create a new character, I need to know what they look like, even if it's just in my head and not yet on paper. Then, like when I get to know a new friend, I discover more things about them. They don't like onions or they always sleep on their left side or they are allergic to mosquito spray. Do these character elements always make it into the story? No, not at all. But do they all add to what the character is like? Of course. And, like with a friend, I get to know the character more as I write the story. Sometimes it takes three or four or ten passes at the draft before I really get to know the character. But when I do finally "find" that character, it's much like making a good friend. Which makes "The End" a hard thing to write. Because, now that I finally know that character inside and out, I'm done with them. And the process starts all over again...
Posted by Stephanie at 11:14 AM 5 comments: