Although I don't have a favorite holiday story, books were always favorite Christmas gifts throughout my childhood--and still are.  A great aunt of mine was a librarian in Evanston, Illinois, and for each Christmas and birthday, she sent me the latest Caldecott or Newbery award-winning books, so I had quite a collection to pass on to my own children and, now, grandchildren.  As long as I had a book to read, I was never bored or alone.  Story characters make good friends you can count on.
To add a bit of holiday spirit to this post, I will end with a Civil War Christmas scene from my co-authored middle-grade novel, Broken Drum (AKA Drums of War in the Scholastic edition).  I imagine the emotions of the Civil War soldiers are still the same fears, hopes, and longings of today's soldiers far from home and wishing for peace.
As midnight approached, the camp was ablaze with Christmas bonfires.  The men gathered near enough to be warmed by the flames.  Shadows and light fell across the faces of all, from the young boys of the drum corps to the older men with gray beards.  They talked of home and family and wondered aloud if the Christmas of 1861 would be their last.
One of the old timers, Jacob Adams, the bearded man who had talked to Charley the first day about seeing an elephant, brought out his fiddle.  He played familiar melody after melody, both cheery and mournful.  Some of the men joined in with harmonicas, and when Patrick brought out his fife, Sergeant O'Toole was coaxed into dancing an Irish jig.  He seemed to grow wings on his feet.  O'Toole, with his broad frame, leapt and stamped the ground in perfect rhythm.  His shadow, now looming large, now becoming small, fell across the amazed boys of the drum corps.  Their sergeant twirled and stamped in time with the lilting, mystical music of the fife and fiddle in a timeless dance.
At midnight the camps burst into celebration.  Men shot guns into the sky, and buglers and drummers heralded the arrival of Christmas Day.  After much cheering, handshaking, and back slapping, the camp grew more silent.  Jacob Adams in his baritone began to sing "Silent night, holy night."  The others joined in, "All is calm, all is bright..." Charley could hear another camp singing a few bars behind, almost like a round.  Camp after camp took up the song until the whole night was filled with the reverent sound of men's voices.  Vibrating the very ground beneath their feet, voices rose with the sparks from the fires into the night air, reverberating across the fields and woods into the town, so that people came out of their houses to listen.  "Sleep in heavenly peace, Sleep in heavenly peace."
When the last notes faded, it truly became a silent night.  Each man sat with his own thoughts.  Charley was aware of a muffled sob coming from the shadows behind him.  In the dim light he saw Frank Simpson, huddled alone, wipe his hand across his eyes.
Posted by Edie Hemingway at 6:13 PM 7 comments: 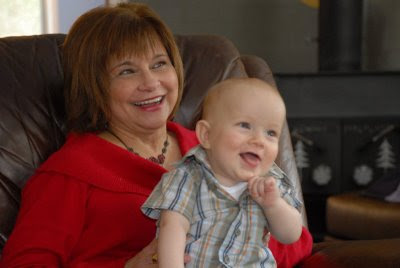 I hope everyone in the world is having a peaceful day.

When I was growing up in Puerto Rico, on Christmas Eve we went to Misa de Gallo, midnight Mass. On Christmas Day, our gifts were mainly clothes and shoes, and maybe a pencil box. We had to wait until January 6th for toys. The night before we placed under our beds grass and water for the camels of the Three Kings. We woke up way too early the next morning to find the toys that the Three Wise Men had left us for being soooo good.

I tried to follow that tradition in Portland, Oregon. It didn't work. By January 6th school had started and my children couldn't talk about the toys Santa had left them. So, I let Santa bring his Christmas toys, but I also made up a Three Kings Day party that usually took place the weekend before or after January 6th. During the party, my children and their friends ate flan, sang "Feliz navidad--tatata," and played guiros, guitarras, y maracas. I read them Tomie de Paola's Three Kings. Then the children went outside to collect grass. Each child placed bowls of grass and water under the Christmas tree, and went into a bedroom to pretend to sleep. When they were "woken up" they found the grass mostly gone (the messy camels had dropped some on the floor). On the empty bowls of water, the children found tiny toys!

My children and their friends grew...but, like my daughter Juliana, they are now having babies like my Conor Richard. Pretty soon we will be celebrating my Three Kings Day party again.
Posted by Carmen at 3:41 PM 4 comments: 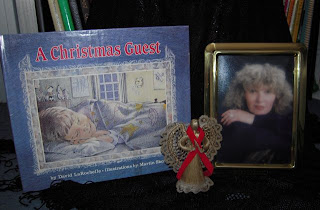 Twenty years ago my first book was published, A Christmas Guest. It's the story of a little boy and his mother who welcome an old woman into their house on Christmas Eve, only to discover later that she was an angel. After she has gone, the boy finds a small wooden box containing a tiny gold angel, left behind by their guest.

I was very excited about having a book published, but my mother was ten times more excited than I was. She carried a copy of the book around in her purse and showed it to everyone, including strangers. She would introduce herself as "the mother of the author." Sometimes it was embarrassing, but the embarrassment was worth hearing the pride in her voice.

The year that the book was published I was at her house helping her decorate her tree. I turned around and discovered a small wooden box on the floor.

"Where did this come from?" I asked.

My mother pretended not to know.

I bent down and opened the box. Inside was a tiny golden angel, similar to the one found by the boy in my book. It radiated my mother's love.

Fourteen years ago this week my mother died, at the age of 57. She never lived to see many of my other books published, books that I never could have written without her love and encouragement that made me feel like I could do anything in the world.

I don't put up many Christmas decorations in my apartment, but I always have a special place next to my favorite photo of my mother for this tiny golden angel. It still radiates her love.

"Now every year at Christmastime, when winter winds blow cold,
I place high on my Christmas tree that angel made of gold,
I sip a mug of cocoa as I gaze up at the tree,
And think about the angel who spent Christmas Eve with me." 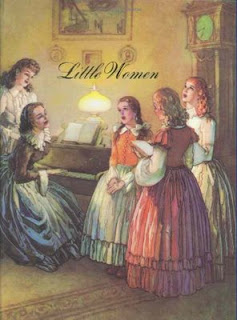 I have worked in children’s book publishing since the mid-80s. As a result my daughter has enjoyed the benefit of her own holiday library of illustrated books with intricate wood engravings, luminous paintings, bright cartoon styles, pull tabs, and pop-ups. From my childhood I cannot remember any holiday picture books, though I do remember hearing the poem, "The Night Before Christmas" so many times I know it by heart and with each hearing or recitation vivid images appeared in my mind. When I was in second grade my mother read me a book that is not specifically a holiday story, and definitely not a picture book, nonetheless the writing speaks to the heart of this season. Louisa May Alcott’s Little Women opens with the four March sisters commiserating.

“Christmas won’t be Christmas without any presents,” grumbled Jo, lying on the rug.

“It’s so dreadful to be poor!” sighed Meg, looking down at her old dress.

“I don’t think it’s fair for some girls to have plenty of pretty things, and other girls nothing at all,” added little Amy, with an injured sniff.

“We’ve got Father and Mother, and each other,” said Beth contentedly from her corner.

The four young faces on which the firelight shone brightened at the cheerful words, but darkened again as Jo said sadly, “We haven’t got Father, and shall not have him for a long time.” She didn’t say “perhaps never,” but each silently added it, thinking of Father far away, where the fighting was.

Nobody spoke for a minute; then Meg said in an altered tone, “You know the reason Mother proposed not having any presents this Christmas was because it is going to be a hard winter for everyone; and she thinks we ought not to spend money for pleasure, when our men are suffering so in the army. We can’t do much, but we can make our little sacrifices, and ought to do it gladly. But I am afraid I don’t.” And Meg shook her head, as she thought regretfully of all the pretty things she wanted.

One by one each sister reveals the gift she has longed for that Christmas. As the afternoon progresses toward evening their thoughts turn to their mother who will be home soon. They scheme to use their meager funds to shower their mother with Christmas gifts and their spirits lift as they switch from a wanting mode to a giving one.

Each March sister struggles with individual character flaws, yet they delight in each other’s company and always create a sense of celebration out of little but their imaginations. They have inspired me for years.

You can (re) read the first two chapters of Little Women and share in their Christmas at this site: http://www.allthingschristmas.com/stories/LittleWomen.html
Posted by Christy at 2:39 PM 2 comments: