Back in the 1980s, I wrote my first novel pounding away on a typewriter in the back room of the frozen yogurt shop I owned and operated. When the manuscript was finished, I answered an ad an agent had put in the newspaper. (In hindsight, the "ad" should have been my first clue this wouldn't work.) The agent's initial response to me was that I could have been more creative choosing my pen name. (This should have been my second clue.) I wrote back assuring her that Edith Hemingway was my real name and I intended to use it. I did send her my manuscript, and she did offer me a contract, which I very excitedly signed and then waited for feedback on my novel.

The agent began sending me handouts about common mistakes new writers make (enough to fill a looseleaf notebook), and I kept waiting for specific feedback on which of those common mistakes applied to my work. Months later she asked me to make the 200 page manuscript longer, so I spent several months going through page by page and expanding the story by about 50 pages. I did not receive any feedback, except that it still wasn't long enough. Finally I said I wasn't going to do more revisions until she gave me specific suggestions on what needed to be done. After six months of hearing nothing, I received a registered letter stating that I had not followed any of her suggestions, I was unresponsive, and she was ending our business arrangement. I truly don't think she ever read any of my manuscript. Of course, I sat down and wrote a long letter back to her, stating that I was the one ending my business arrangement with her. It helped diffuse some of my anger, even though I never mailed it.

So what did I learn by this? First of all, not to jump at the first sign of interest, to do my homework before signing a contract with an agent, to find out what genres he/she represents, to find out if this person truly likes my work and if he/she has a personality that meshes with mine.

I did eventually give up on that manuscript, which is still sitting on the shelf, but I did lift an entire scene from that novel and inserted it (with changes, of course) in ROAD TO TATER HILL.
Posted by Edie Hemingway at 9:09 AM 7 comments:

As you know, my sister used to call me a liar because I was always making up stories. She also told me that staring at people wasn't polite. Maybe. But that's called point-of-view. I stare to pretend I am in people's heads and think what they think.

You also know that my classmates poked fun of me when I spoke in English. Hello? Are you there? They challenged me, and here I am writing, reading, and speaking in English.

But what you don't know is that I quit writing for a few years. By then I had two published books--and a new literary agent. I have no idea why she signed me up. She kept telling me that I wasn't ready to submit, that I wasn't there yet. I felt so small I quit writing.

A few years later, an editor asked me to write a biography. I didn't think I could write it. But it was time to prove that agent that she was wrong.

What a blessing those challenges have been!
Posted by Carmen at 2:30 PM 6 comments:

My moment in the spotlight

At one of the first local SCBWI conferences I attended, I submitted a manuscript to be reviewed by a New York Editor. I was so excited when my manuscript was one of ten selected to be reviewed and discussed in front of the entire audience.

Before the conference we received copies of the other manuscripts. I hate to admit it, but I was secretly glad when I saw that my story was better than the other nine submissions.

All the conference attendees crowded into the auditorium where the New York Editor would spend a full five minutes critiquing each story. She loved the first manuscript (which wasn't very good). The second manuscript (which was worse) she loved even more. She went on and on extolling its positive qualities and told the author to please send the entire story to her publishing company - she'd like to consider it for possible publication. It was hard to restrain my mounting excitement.

And then it was my turn. I picked up my pencil and got ready to take notes on all her compliments and any suggestions she might have.

The New York Editor made a sour face. "There really isn't anything I like about this one," she said. She shuffled my manuscript to the bottom of her pile and went on to the next story.

I felt as if I had been punched in the stomach. I remember trying to keep a smile plastered on my face, and walking through the rest of the conference on auto-pilot.

The positive outcome from this experience? I didn't give up. I went on to write several successful published books. The story that she hated (and which I still like) I use as a very successful story writing prompt with kids when I visit schools. And when I became the person giving critiques at SCBWI conferences, I remember the sinking feeling I experienced, I remember that opinions differ, and I always treat each author I review with gentleness and respect...and find at least one nice thing to say about their story.
Posted by David LaRochelle at 7:11 PM 8 comments:

I’ll show them and then they’ll be sorry!

Did this ever run through your mind when you were misunderstood, under-appreciated, or limited in some way? My mother banked on my spunk. She used reverse psychology to teach me to ride my bike. She bet I couldn’t do it, and I determined to prove her wrong.

Steve Jobs said being fired from Apple was ultimately a good thing. In the midst of that humiliation he realized he still loved his work and wanted to continue anyway.

Earlier in my career I turned in art for a book and the contract was subsequently canceled. The news hit me like a punch in the stomach. I curled in pain. I was so ashamed. Surely everyone in the industry knew about my rejection, I thought. I imagined a scarlet letter across my chest.

There were scrooges involved. I believe this only could have progressed to this point from lack of communication. It has always been my practice to show sample art and work-in-progress. At no point did the art director or editor alert me that they were unhappy. I received comments like, “Add more yellow.”

I was filled with self-doubt after this experience. Who would hire me again? I desperately wanted to get back up on the horse. My next opportunity came like a gift from a fairy godmother. I approached the project in a completely different style and the book garnered three stars, an ALA notable award, and many other accolades. Sound familiar, Stephanie? Yep, the book that brought me back was Elizabeti’s Doll. I am forever grateful to our editor, Liz Szabla.

There is value in disappointment. It helps define weakness, focus attention, and clarify desire.

Sleeping Out and the Gumby and Pokey Willies

As I child I was bashful. I liked adventures as long as they were in my neighborhood, as long as when the day ended I would be home, snuggled in my own bed. Once when I was small, my father's best friend had a daughter just my age. She was kind. Her name was Claire. Her mother was a Cajun woman and as warm as she could be. My father trusted her father like a brother. Claire invited me to spend the night out at her house. Everyone encouraged me. I wanted to go and play with Claire and her family, so off I went.
The day was going wonderfully, but as night fell and I took my bath, fear tiptoed in. I wondered what might be in the closet at the top of the cabinet: A monster surely. I felt uncomfortable and homesick and began to cry.
Claire's mom tuned to my feelings. I told her I wanted to go home and she called my parents. My dad drove over and scooped me up. I also remember being a little afraid of Gumby and Pokey. I don't know why as I liked the television show and I had the little rubber Gumby and Pokey dolls. I had a nightmare once that they were chasing me and I snuggled into my parents bed for safety and comfort. After that dream, I'd make sure to put them inside a shoebox in my bedroom closet.
Posted by betsy woods at 1:12 PM 6 comments:

My own personal Scrooge 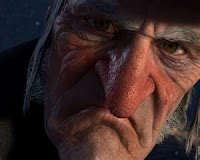 As a writer, the biggest Scrooges in my life are not the people who don't like my books. I often don't like books that I read, which I feel is my right as a reader. We aren't all going to like every book that we read. So I get that not everyone is going to like my books. That is their right. No, the biggest Scrooges in my life? The people who don't like my books AND then feel that gives them the right to say things about my books AND me. When The Compound first came out in 2008, I was excited to see what readers had to say about it. It had gotten a starred review from Publisher's Weekly, which had also featured me in an article about debut authors. I signed up for Goodreads and reviews started to come in for The Compound. Here is one of the first:
"The premise is great: a Seattle tech buzillionaire builds a compound in anticipation of a terrorist attack, and then ushers his family into it one day ( one kids and a grandma are left behind) where they remain for years. Gradually, the kids become suspicious about what's really going on. The writing is just intolerable, though. My ARC says the author is a creative writing teacher, so I guess in this case it's true what they say about what "those who can't" do."

Wow. So it's not enough to bash my writing ( fine, everyone is entitled to their own opinion) but to throw around what is the meanest cliche about the teaching profession? Many of my friends and relatives are teachers, as am I, obviously, and I despise that people even have the nerve to utter such an awful, derisive thing. I won't lie, this one left me in tears and made me spend the whole day questioning whether I should even be a teacher OR a writer.
I then went on to get some more reviews: Kirkus, School Library Journal, etc., that didn't bash my book. So I learned not to go looking for reviews. The ones that matter the most will come to me from my editor.
And I think I've had the last laugh. The Compound has been on about 17 state reading lists, and I get emails and Facebook messages every day from readers telling me it's the best book they've ever read. ( Again, everyone is entitled to their own opinion, but I tend to like those kind of opinions!) And I continue to get warm and wonderful feedback from my students at Gotham Writer's Workshop, who apparently seem to think I don't suck as a teacher. So, to my own personal Scrooge, I say ....
Merry Christmas!
Posted by Stephanie at 7:27 AM 10 comments: