A year ago, I was in the midst of revising my middle grade novel. My editor had told me there was something still missing in the voice of my main character--something intangible. She suggested I think of THE WIZARD OF OZ, which begins in black and white, then bursts into color. In some of my scenes she was getting those bursts of color, but others were still in static black and white. I was struggling with what was needed to elevate those scenes to technicolor.

The answer came to me in one of those "aha" moments in the midst of an SCBWI presentation by Molly O'Neill (Asst. Editor at The Bowen Press), in which she was reading the first pages of the books which would debut with HarperCollins' new imprint. These are the opening words of Kathryn Fitzmaurice's middle grade novel, THE YEAR THE SWALLOWS CAME EARLY:

"We lived in a perfect stucco house, just off the sparkly Pacific, with a lime tree in the back yard and pink and yellow roses gone wild around a picket fence. But that wasn't enough to keep my daddy from going to jail the year I turned eleven. I told my best friend, Frankie, that it was hard to tell what something was like on the inside just by looking at the outside. And that our house was like one of those See's candies with beautiful swirled chocolate on the outside, but sometimes hiding coconut flakes on the inside, all gritty and hard, like undercooked white rice."

Something about that conversational dip into both the character's (Groovy Robinson) soul and the author's (Kathryn Fitzmaurice) struck a chord in me. In that instant I realized I needed to change the point of view in my own novel from 3rd person to 1st person in order to find a stronger, more colorful voice for my character.

I remembered the title of the novel, but not the author's name. Five months later, at the SCBWI conference in LA, I was invited to have lunch with a group of authors from the Class of 2k9. When everyone introduced themselves and the titles of their books, I recognized THE YEAR THE SWALLOWS CAME EARLY and met Kathryn in person. I was so excited to make that connection!

This is the week of Kathryn's debut as an author, and THE YEAR THE SWALLOWS CAME EARLY will not disappoint you. You'll find that "Kathryn Fitzmaurice's tender debut novel is as full of promise as the swallows that return home to San Juan Capistrano every spring."
Posted by Edie Hemingway at 3:39 AM 8 comments: 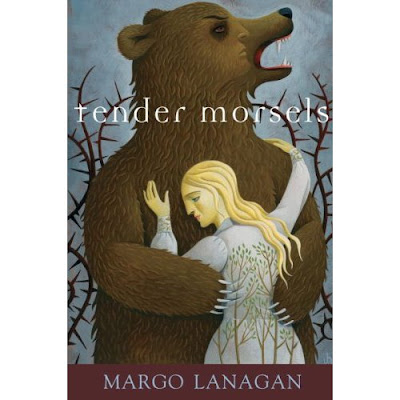 Based on the Grimm Borther's SNOW WHITE AND ROSE RED, TENDER MORSELS is definitely a book for matured readers.

After being sexually abused by her father and raped by a gang of village youngsters, Liga is traumatized. She escapes to a safe heaven where she and her two daughters-- Branza and Urdda--are protected. But as a teenager, Urdda crosses the border from this heaven and the village were "vivid people" live.

Margo Lanagan's brilliant storytelling and language kept me reading after the first bestial but honest scenes. This, her first novel, made me think about human nature and where I stand in this world of cruelty and gentleness, prejudice and acceptance. It made me prefer my village with all its flaws than a safe heaven where no "vivid people" live.
Posted by Carmen at 10:13 AM 6 comments:

Katherine Applegate's HOME OF THE BRAVE is the book that has been at the top of my recommendation list this past year. It tells the story of Kek, a young refuge from Sudan, who moves to Minnesota in the middle of winter. He has witnessed his father and brother being killed and his mother is missing. Not only does he have to deal with the loss of his family, he has to adjust to a new culture, a new language, and a climate unlike anything he has known. I liked this book so much because:

#1 It's funny. Despite the serious issues with which the book deals, Applegate has incorporated lots of humor as Kek scrutinizes and responds to American life. His attempt at washing dishes in the washing machine is just one of the ways in which he is baffled by his new surroundings.

#2 It's beautifully written. The language is expertly chosen to convey Kek's attempt at describing America in terms of the culture with which he is familiar.

#3 Kek himself is an immediately likable character. He is hopeful despite his tough situation, and he demonstrates a profound level of bravery.

#4 It was a fast read. The free verse form in which the story is told makes for very quick reading.

#5 It helped me see the world in a new way. Applegate gave me a glimpse of what it would be like to be an immigrant to our country. I can't help but be more sympathetic to other people facing such enormous changes.

#6 It was a departure for the author. I admire Katherine Applegate's bravery in tackling a form/style that is so vastly different from her Animorphs science-fiction series. She succeeded marvelously, and she provides a good role model of being willing to stretch one's self as an author.

Has anyone else read this title? If so, I'd like to hear your thoughts. Perhaps you can round out my top ten reasons why this book is such a winner!
Posted by David LaRochelle at 3:40 PM 7 comments: 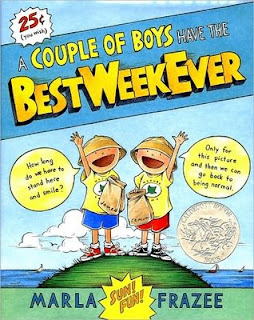 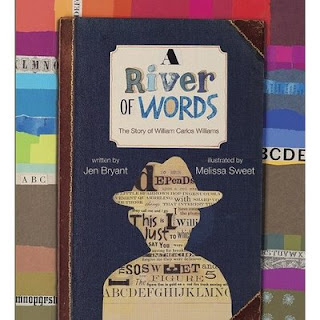 Checking out new picture book titles at ALA last summer, I fell head over heels for A River of Words: The Story of William Carlos Williams, written by Jen Bryant and illustrated by Melissa Sweet, (Eerdmans Books for Young Readers). WCW’s most anthologized poems “The Red Wheelbarrow” and “This Is Just To Say” exemplify the Imagist-influenced philosophy of “no ideas but in things”. Bryant’s lyrical treatment of the poet’s life is spare. Sweet’s mixed-media illustrations are full of words, cut from ephemera or hand rendered. They are as verbal as WCW’s poems are visual. I love the blurring boundaries of text and image, but am sorry that the stunning way they come together provokes low sentiments in me. I am jealous. I wish I had created this book.

Last fall seven other speakers and I gave keynotes at MAZZA Museum’s Fall weekend. Marla Frazee showed slides and spoke of a recent book she wrote and illustrated, A Couple of Boys Have the Best Week Ever, (Harcourt, Inc.). The book is based on the true story of Marla’s son James and his best friend Eamon’s (editor, Allyn Johnston’s son) week of “Nature Camp” at Eamon’s grandparents’ beach house. Their free time spent inside, eating waffles, and playing video games turns out way more interesting than nature. Marla’s text and illustration work a wonderful counterpoint full of funny contradictions. Randolph Caldecott is howling with laughter.

The Caldecott Committee’s selected these as two of this year’s Caldecott Honor books.

As a lover of fiction, I always have to coax myself into reading nonfiction. But nine times out of ten, I end up thinking the read is fantastic, and I end up googling the people in the story to find out more about them. And then I wonder why I just don't read more non-fiction.

This past week, I went to the library and was happy to discover a book I'd been wanting to read:

The Year We Disappeared by Cylin Busby and her father, John Busby. Although I'm quite certain this is marketed as children's non-fiction, it was in the adult non-fiction. Be that as it may, the book enthralled me and I can't recommend it enough.

Told through alternating points of view, that of father and daughter, the book tells the story of the year when Cylin was nine and her policeman father was shot. It is not a routine story of policeman shot in the line of duty, because he suspects the shooting was intentional, in order to prevent him from testifying at an upcoming trial. So the family gets placed under twenty-four hour armed guard, and their life changes.

This is where the story begins, and it is nothing less than amazing. And then, of course, I had to look them up online and see how it all turned out....