I usually approach a story with a strong voice, a character or characters with a problem, and a setting. The voice is the engine that propels the narrative. Sometimes I know the ending, sometimes I have a vague idea of what the ending must ultimately be, but the journey of the story influences and enriches how I arrive there. Even when I know ultimately what state of being the character must arrive at the end of the story, the means by which the character arrives influences so very much, and in many ways, writes the story. It is sometimes clear, sometimes muddled.

I am muddled right now as I work on a picture book, Miss Smackbottom Lives Three Doors Down. I know my main character, I know my antagonist, I know what must transpire, and I have a sense of the state of being at which my character must arrive by the end. Still, a missing link (s) eludes me. As if hiding behind an opaque screen in my writing mind that I can almost make out, it is playing hide and seek, throwing hints in my direction if I don't "think" too hard. This frustrates and amazes me because I recognize the creative process, and know I have to allow myself access by crawling through a window, so to speak, instead of knocking on the front door demanding it show itself. And, of course, practice patience and stillness. I do this by smiling at the games of my muse, who is just waiting for me to figure out the solution that completes the story.
Posted by betsy woods at 10:43 AM 3 comments: 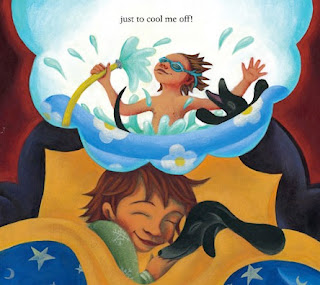 In an interview with 2009 Children’s Writer”s and Illustrator’s Market, my editor, Allyn Johnston said:

Whenever I am working on a picture book, I try to remain as mindful as I can of the actual experience an adult and a child will have reading it together. I think of the shared feelings of connectedness they’ll have as they listen to the story—as much for a raucous book as for a quiet one.

I try to have those thoughts inform all of my decisions—especially about pacing, and most especially about that Mother of All Page Turns: the one from pages 30-31 to page 32. That’s the most important part of a picture book, the place where the arrow goes right into the reader and listener, and that’s where I want the book to have its strongest emotional impact.

Whenever I write a picture book, I keep this in mind. The ending as an “arrow” to the heart of the reader. Does this mean I will begin with an ending? Currently I have lots of picture book beginnings, middles, but the endings are waiting in the wings, waiting for that emotional impact. When I began writing Winter is the Warmest Season I had the first line: “Winter is the warmest season. Most people think it’s summer with its long steamy days, but not me, my world is warmest in winter.” It was a good beginning, but good picture books need a good beginning and a good ending. The ending is what I did not have. I made lists of warm things in winter with opposing lists of cool things in summer. The comparisons began to bounce off of each other creating a sense of passing time. Suddenly my story was passing through a typical snowy winter day with a party at night, bath time, bedtime with books and hugs. It was not until I put my character to sleep that the ending came to me and when it came, it made me laugh out loud. That is when I knew it was ready to send to my publisher.

To Know or Not to Know

Since I prefer to know my endings in order to have a sense of where I am “going” in a story, I usually do not start until I have at least a fairly good grasp of my characters, plot, and resolution. Even with this “security,” in the course of writing I frequently veer off into unforeseen directions, and occasionally wind up changing my original ending. Still, the fact that I think I know where I’m going gives me the nerve to begin a story in the first place.

This winter, though, I have been stuck for quite a while on several different projects and so I decided to try a different approach. For one story I had a few characters, a setting, some scene ideas, and a quest. I knew where the characters would go and where they would physically end up, but I didn’t really have a firm grasp on who these characters were, what would happen along their journey, or what would serve as the climactic emotional turning point. So I dove in and just started writing. This was dangerous territory for me—shutting off my inner critic and allowing myself to simply explore the world I was inventing as I went along without worrying about whether it would all work out or not. I figured, “Hey, at least I’m writing.” To my (grateful) surprise, characters began evolving, new scenes started popping into my brain, and I stumbled upon an emotional climax that was both unintended and satisfying!

I still like to know where I’m going in a story, but if I’m stuck, I learned this winter that I don’t have to wait for inspiration to strike—I can go find it!
Posted by Mark at 8:29 AM 6 comments: