I love them both.

But if I am inspired, do not phone me! Of course you may say you don't know when I am inspired. Don't you hear my inspiration when I answer the phone with a "Yes"? Or when I answer your emails with one word? Writing is my job. I take it seriously. I have deadlines, just as you do. I love my job. Don't you like yours?

When we are both free, I would love to see you. Warning: If I haven't done anything but writing, I won't have anything else to talk about. Maybe you don't want to see me. In that case, I'll go back to my writing.

I need time alone to focus on writing and art. I always welcome Mondays for this reason. Most of my "contact" during the week is through e-mail and social networks. I am startled when the phone rings. I like my silence. I too have the company of the family pet. Scratching is the sound of interruption—the cat wants in or out.

The balance to this isolated part of work life comes through critique groups, professional events, and author/illustrator appearances. I have three critique groups, but am particularly thankful for my illustrator critique group. All five of the members are accomplished illustrators; four out of five are also picture book authors. I have worked professionally as an art director, but have not often received very much art direction. I need it! In this illustrator critique group I get extensive, specific feedback on sketch dummies and art in progress, as well as responses to overall picture book story concepts. It is wonderful to have others share my projects, enter in to my vision, help me see my strengths, and give ideas about improving what is still weak. I like being part of this process for others. We have come to be very honest with each other. This trust continues to build over time. The works stand apart from each creator and we are all problem-solvers together.

Left: four out of five of our illustrator critique group with our new Indian parasols from Ashley Wolff's recent trip to present to schools in India—me, Julie Downing, Katherine Tillotson, and Lisa Brown. Below: Ashley Wolff, also part of the illustrator critique group, author Elissa Haden Guest, Julie Downing, and me—we all celebrate our birthdays together each year in a January Jubilee.

I enjoy the community of local authors and illustrators in the San Francisco Bay Area. There is periodically some event that draws us together. Tonight I'm looking forward to the Effie Lee Morris lecture at the San Francisco library, featuring Jerry Pinkney. Jerry was my illustration teacher at Pratt Institute years ago (James Ransome was in that class, too). Later I worked as art director for Jerry's son Brian Pinkney. They are a sweet, sweet family! Many friends will be at the lecture, so it will be fun to meet. I'm hoping to also snag a moment to say hello to my very special teacher.

Presenting in classroom, libraries, museums, bookstores, and other community venues is a wonderful and essential counter to the quiet creation time. This is where I see the response from my intended audience. I like small classroom-sized groups best where I can share the actual original art and the materials I use to create the art. I love the questions. I also really like chances to do hands-on art projects that relate to my books, or projects where kids become authors and illustrators, too. 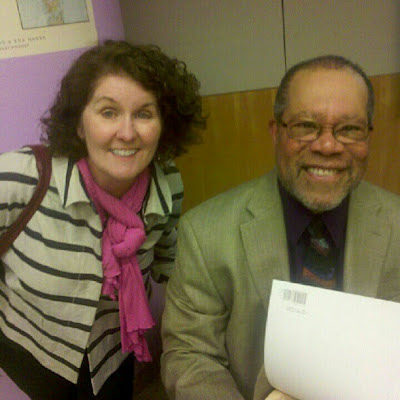 Our topic this go-round is that of isolation and community. Those are sort of opposites, but they make sense as a writer. Writing is a solitary task. Most of my days I am alone, in my house, with two dogs and a cat to keep me company as I try to put a bunch of words on the paper. Some days it isn't easy, but I'm used to it. Do I seek out a community?
I did at one time. When my first book came out in 1998, the internet did not exist. We didn't even own a computer. So  social networking wasn't even invented, let alone a part of my day. One of the first authors I met was John Coy, when we were both presenters at a young author's conference in Fergus Falls, MN, my home at the time. But time spent with other writers was rare.
Things had changed by 2008, when my first YA came out. I felt like I should join some online communities of other writers doing young adult. And I found myself sucked into this vortex of daily litanies and competition that reminded me far too much of people trying to sit by the most popular kids in the high school cafeteria. I could post that "The sky is blue!" and a dozen people would tell me why I was wrong and why they knew so much more about the sky.
I found that, more often than not, my time spent on that site left me feeling inadequate and left out and ticked off. Not exactly what one should gain from a community of "fellow" writers. I even was at a national conference, came across a circle of my online "friends", and found myself slinking away without saying hello because I was afraid. Afraid I wouldn't be welcomed. Something I hadn't felt like since I was a teenager. And I am far too old to let anyone make me feel that way.
So I quit cold turkey. And decided that, if I was going to be part of an online community, it should be one that the writers were happy to be part of. One that they entered, and left, with a smile on their face or a bit of inspiration in their heart. At the very least, I wanted the others, and myself, to be able to give and receive support. And if I ever met those people in person, I would want to be welcomed with hugs and laughter, as I would welcome them.
My fellow Spuds do that. They teach me things. They continually inspire me to be better. They listen to what I have to say.
Which is exactly what one should expect to get from a community of writers.
I love my fellow Spuds:)

I was scheduled to post last Tuesday but postponed it out of respect for Stephanie’s post about Maurice Sendak’s death.  But there are two very special picture books I only recently discovered, and I wanted to share them with the rest of you.

The Recess Queen by Alexis O’Neill and Laura Huliska-Beith, according to one reviewer, is “a fresh and original twist on the common issue of bullying.”  It’s also hilarious!

Officer Buckle and Gloria, by Peggy Rathmann, is a Caldecott Medal Winner from the mid-1990s.  The Publisher’s Weekly review summarizes the action: “Office Buckle, a mustachioed policeman who wears a crossed-out-banana-peel patch on his sleeve, has a passion for teaching students about safety, but his audiences tend to doze off during his lectures. They awaken, however, when police dog Gloria joins Buckle onstage. As Buckle speaks, Gloria-behind Buckle's back-mimes each safety lesson (e.g., leaping sky-high for "Never leave a thumbtack where you might sit on it!" and making her fur stand on end to illustrate "Do not go swimming during electrical storms!"). School safety increases tenfold and Buckle and Gloria find themselves in great demand. But when he finally learns of his sidekick's secret sideshow, Buckle's feelings are terribly hurt. Rathmann's high-voltage cartoons, outlined in black ink for punchy contrast, capture her characters' every feeling, from Gloria's hammy glee and Buckle's surprised satisfaction to Gloria's shame at having tricked her partner. In a sound and sensitive conclusion, Gloria's disastrous attempt to go solo inspires Buckle's "best safety tip yet": "Always stick with your buddy!”

Both of these books demonstrate the power of picture books to make you laugh and also think.  And both are guaranteed to put a smile on your face.