When I was a Boy 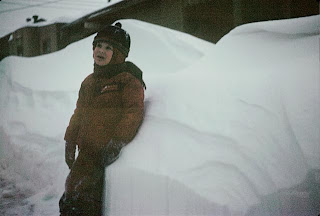 When I was thirteen months old, my mother gave birth to a little girl. My new sister was named Mary Elizabeth, but everybody called her Molly. She was born early and had problems with her lungs so she had to stay in the hospital for a few weeks. But she got better and came home.

One evening I could hear her from her crib, and I told my mother, "Baby's crying." Molly was having problems breathing and my mother called my father who came home and rushed her to the doctor. Molly died that evening.

My parents decided that I was too young to go to the wake or the funeral and nobody knew what to say to me about what had happened so nobody said anything about it.

It wasn't until I was much older that I heard about my sister Molly. Her death has had a big impact and I continue to miss her.
Posted by john at 9:20 AM

What a sad experience, John. I shudder to think of how many issues were dealt with via silence because adults didn't know how to address things, at least in my own life. With any luck you were able to process the information, once you received it, though I'm not sure the pain will ever completely go away (I might be projecting here, though, speaking on behalf of my own experience as the one who found my mother dead when I came home one night during high school). Your picture of a sad little boy brought a tear to my eye, reminding me of life's pain but also the resiliency inherent in our common human spirit. Thanks for sharing this tough memory.

Oh, John, this is so similar to my own experience with my baby sister, Mary Kate, and the way no one really talked to me about it--except that I was nearly 11 at the time. And, as you know, my experience resulted in my book ROAD TO TATER HILL. I am so sorry for this sad impact on your life.

And, Mark, my heart goes out to you, too, for your painful experience of finding your mother!

John, that picture of you moves me, too. I'm so sorry for your loss of your little sister, Molly. Have you written this event into your work? If you haven't had the chance, you should definitely read about the similar experience in Edie's book.

There's a powerlessness in childhood, especially when adults lock their children out of important events by silence. My parent's divorce was handled this way. We hadn't a clue it was happening. I know that generation of parents did not intend to harm, but these kind of secrets usually leave scars.

Mark, I'm also so sorry for your experience.

I was once asked by a pediatric nurse at Loma Linda University Medical Center to come up with a children's book about babies who never come home from the hospital. She said that the siblings don't understand and it's hard to explain. I asked her why the babies die and she said that there's no cause that they can find. They just don't grow. Your experience reminds me of this John, because I could feel the loss in your writing voice, but also the way a child looks at losing a sibling without someone to explain it to him. I never wrote the book, because I couldn't even contemplate the feelings of the child. It sounds like you, Edie, and Mark might have the best chance at understanding and communicating such intricate feelings. (I know that Edie already has through her novel, which probably brings peace to so many people.)I also wonder if Christy could put into words her feelings about loss through divorce. Children's books are the greatest healers, offering words that children don't have yet and opportunities for conversation that parents might not be able to start. I am thankful for all of you and your insights.

Told from your adult view, I can only imagine how your child self wondered about everything and hoped for more words from the adults in your life, John. The sorrow we carry with us shapes so much about how we react to other experiences in our lives.

John and Mark, both of you, these experiences are just heartbreaking. I'm so sorry.

Thank you all for your thoughtful comments.I agree about the power that sorrow and not talking about things has and I wonder if that is not a central reason many of us became writers. The death of a child does feature in my novel Crackback, but it is a subject I feel a need to explore more deeply and Edie's Road to Tater Hill provides another touchstone. Mark, I can't imagine what your experience was like and wonder if this is something you've written about. I feel such strong connection to each of you and appreciate your strength and support.

John, I've written about this particular experience in journals and other formats for my own healing, but nothing for others to read, though I'm sure it's permeated my work in other ways, along with definitely impacting the person I have become. Who knows, maybe someday....

I have been away from the blog for a little while. John, the story of your little sister teaches me deeply and Mark, my heart breaks for you on that afternoon coming home. What resiliency both of you have to become such open creative writers.

Children are so wise. I think their antenna are highly sensitive and though they may not be able to always define the loss, it's presence becomes a definition unto itself. I think our parents thought that silence might protect us, not only from the heaviness of our own grief as children, but maybe their personal grief also.

I lost a brother also. I miss him still.

Children know so much more than what adults give them credit for. Even with other adults, I think we sometimes try to "protect" them by not talking about difficult issues. I know I do. And that's a shame, because it has the opposite effect. Thank you, John, for sharing this story, and you too, Mark and Edie.