I grew up in south Florida, and I often hopped on my bike and rode three miles to the beach. So you'd think my biggest fear might be the occasional alligator that I encountered stretched across the bicycle path OR the nearly 9-foot lemon shark that swam within a few feet of me when my father and I were standing along the seawall. Yes, these were a little "off putting" to say the least, but the creatures that gave me nightmares were the giant blue land crabs!

Whenever we had a heavy rain, the land crabs were flooded from their shallow holes, and they came out snapping. I hated going out my front door on a rainy morning because the crabs often took refuge on our front porch--not just one, but sometimes four or five. They were blue and white and pink and sometimes spanned more than a foot with their claws outspread. I could hear the clicking of their feet on the terrazzo floor of the porch, and their claws looked strong enough to snap off a toe or a finger. There was a nearby park where my family often went for picnics, but I always avoided the sandy/muddy area sloping down to the pond. It was pockmarked with holes, often with large eyes peering out at me and with a claw ready to attack. No, I was never actually grabbed by one of those claws--except in dreams.

Would one of these scare you? 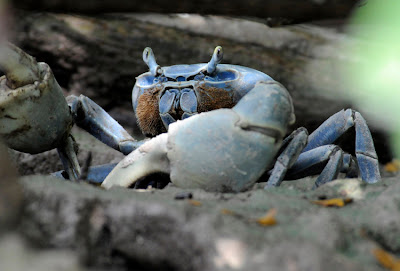 Posted by Edie Hemingway at 3:15 PM

Terrifying! They're like creatures from a horror movie. Aren't you glad you moved North?

Yes, they were like alien creatures waiting to attack. But I have to say there were many good things about growing up in south Florida, too--especially in the era of my youth when I had lots of freedom.

Edie, sounds like the beginning of another novel. I can see where these would have been terrifying, especially hearing the clicking.

Your description of these crabs makes them terrifying indeed! I would have had nightmares for sure if I heard them outside my house in the rain. I agree with John, another novel beginning!

YES! Just reading about those crabs gave me the shivers! Man, people have such rich backgrounds from which to derive story material! I think this round of posts is one of my favorites ever! I love hearing these things about the other Potatoes.

I agree with David; this is a great round! Each unkown factoid a potato shares, triggers memories from other spuds--definitely a way to inspire one another.

Oh my gosh, those look creepy. I know out on Palmyra, an island in the Pacific, they have coconut crabs that can snap a coconut open with their claws...

Having made a few trips to South Florida and the Keys, on fishing trips, I was aware of local dangers such as sharks, crocs, mosquitoes, GIANT cockroaches, and whatever those little stingrays are called that can poke your ankle while you're wading the flats -- I'm glad I didn't know about those dang crabs!!! The sound of their clicking, especially, is kind of making me uncomfortable even as I type this!

I dont know about calling them creatures from a horror movie,because Im from P.R. and since I was 5 years old I have been catching them by pulling them out of there holes, and they are the best crabmeat you will ever taste. they are actually very timid and will not go near any person unless provoked.