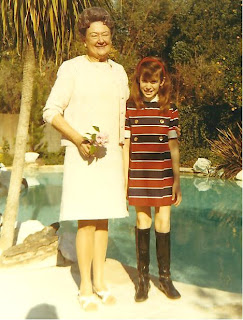 Diane with her Grandma in the photo. Note Diane’s stylish go-go boots.

Diane Adams, who is a writer and illustrator, is a delight to talk with. She lives with her husband in southern California and has a son who lives in Utah. Her husband is in his last year of teaching and he and Diane have had extensive discussions about what they will do when he retires. One of them would like to get an RV and drive around the country. The other one prefers staying in hotels. Can you guess who prefers what?

1. How do you feel about having two books come out in 2012? Do you know the months? Can you tell us about them?

It's actually looking like one will be out in Spring of 2012 and the other in 2013, as Chronicle is searching for just the right illustrator. This is a good thing in my view, as it gives me more opportunities to focus on each book individually. I'm basically just thrilled to have two books coming out!! The book with Peachtree Publishers is the second in a series about a little girl named Emily Pearl, who is testing her independence and trying the patience of those around her. The book with Chronicle is also a story of growth for a young child, but more from the viewpoint of the family. I seem to be drawn to this theme as I watch my child find his way in the world at age 23. A mom is always a mom!

My best roller coaster ride would have to be Indiana Jones. It's just the right amount of scary for me. I've never been on Splash Mountain, so that has to be my next one. I'd also like to try the big one at California Adventure. Now if you had asked me my favorite ride, it would have to be It's a Small World, but none of my family will go on it with me. Is it because I sing along with the characters?

3. How's writing and illustrating like riding a roller coaster?


4. When you write a picture book, do you envision yourself illustrating it? Have you engaged in negotiations with publishers over this?

I'm actually in negotiations right now for a book that I'd like to illustrate, but I love what Kevin Luthardt and Nancy Hayashi have brought to my first two works, and look forward to seeing what the next two books look like. It's sort of like opening a Christmas present when I see the illustrations matched to my words. I enjoy being a part of a team, especially with such creative and talented artists.

5. You worked with the writer Stephanie Bodeen on A HOME FOR SALTY. What is she really like to work with?

The stories I could tell you... Actually, I didn't work with Stephanie at all, except at book signings which were spectacularly fun!! She was off writing her blockbuster novels while I worked with two wonderful wildlife experts in capturing the habits of the inhabitants of the San Pablo Bay National Wildlife Refuge. It was a fantastic experience.

6. Do you have any advice for new writers?
I do have some advice for new writers, and that is don't isolate yourself from your peers. Join the SCBWI, attend conferences, find a book group. It's important to be supported by others and to support others. It's what makes the process more fun. Time alone is necessary, but be a part of the world around you. That's where the magic happens, at least for me.

Hershey with Almonds!
Posted by john at 6:30 PM

Diane, excuse the roller coaster pun, but you are on a roll! Congrats on your upcoming titles. I would love to see a book where you write and illustrate.

You definitely need one you both illustrate and author:) Congrats on your upcoming titles! ( And I haven't given up on our hare book either)

What prolific writers and illustrators these spuds are. Congratulations on your two upcoming books, Diane, and keep riding the roller coaster!

My favorite roller coaster is the one on Coney Island- The cyclone. Call me old-fashioned! You are right (as is John Prine), the roller coaster is a good metaphor for the life of writers and illustrators!
Congratulations on your upcoming books- I loo forward to seeing them!

I'm not sure it's my favorite, but The Cyclone is definitely the most memorable of all the roller coasters I've been on. That's one wild ride! You've got to try it, Christy!
Congratulations on your TWO upcoming books! Who is your editor at Chronicle (I'm working with them on a book right now as well)?
I liked your comparison of receiving a newly illustrated book to opening a Christmas package. I'm glad you've always had pleasant surprises opening that package...rather than finding wool underwear!

Diane, it is a delight to know you more. It is no small feat to have two books on there way. I yearn for that!

Diane, my apologies for calling you Christy in my earlier comment! Perhaps I've ridden one too many rollercoasters in my life!

David, not a problem. I was battling cookies at the time and did not notice. They are all eaten now, so that I can get back on the blog!! Christy, I think you might have sent me help, but the page came up blank - leave it to technology to create chaos in my life today. There's a conference at my local university that I speak at from 4:30 tp 5:30, which added to the stress level!

Now, thank you all for your comments. It is an exciting time, and I'm pleased to have no wool underwear in any of my books. Julie Romeis is my editor at Chronicle, by the way David. Have you worked with her?

John, thanks for the fun interview! It's been great getting to know you all better.

Now, let's see if this posts!

Diane, it posted. What great comments. I didn't expect the roller coaster to zoom off that way, but that's what they do. We'll get the RV rolling next time. What fun to get to know you better in this way.

David, We lived in Brooklyn for 18 years, so we went to Coney Island many times. I am NOT a roller coaster person, but my daughter has been on The Cyclone several times.

Another great interview! Roller-coasters are not for me, but I'm down for some Hershey's with almonds!!

I'm working with Melissa Manlove at Chronicle. They always publish such beautiful looking books; I'm delighted to be working with them.

I follow what Diane says! She is a great person to work with. I am so lucky to have met her and taken one of her classes.