An Interview with the Talented Christy Hale by Betsy Woods 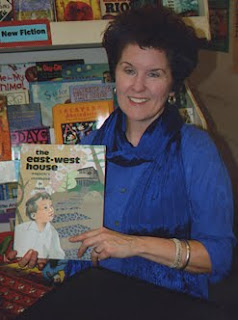 How does shape and form, color your work?
Many of my writing ideas begin as visual connections. I recently delivered a picture book about shapes, The Shape Tree. This should have been my second publication as both author and illustrator, due out in fall 2011 from Tricycle Press. However, Random House decided to kill the imprint, and Tricycle publications will conclude with their summer 2011 list

I’m excited about my upcoming project with Lee & Low books, Dreaming Up: A Celebration of Building (spring 2012). My concept evolved from contemplating the visual similarities between children’s buildings and works of contemporary architecture. Reinforcing this visual approach, the book features my concrete (or shape) poetry.

Other books are in the works that begin with visual form then find verbal form.

Many of your illustrations are kinetic, in that I feel a momentum in them. That movement feels rathe 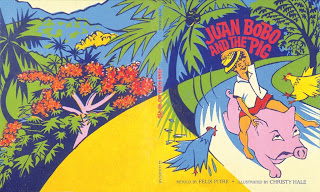 r musical. Is it?

I want my pictures to move. As I worked on the art for my first picture book, Juan Bobo and the Pig, retold by Felix Pitre, I listened to salsa music for inspiration.

In my second collaboration with Felix Pitre, Paco and the Witch, I employed picture frames, or enclosures, and then intentionally let elements of my compositions break out of those frames. This gives the impression of movement toward the reader and thus a more animated space.

My husband is a filmmaker and also studied animation. He has helped me think about a book like a movie, with changing angles of the camera and different perspectives—now close, now far. Sometimes he even acts out gestures!

In The East-West House: Noguchi’s Childhood in Japan, I was influenced by Japanese art, which makes use of asymmetry and diagonals. This helps create a more active picture area. I avoid symmetrical compositions, which though restful, are also static.

Movement is an element important in visual art as well as music.
Art education has been a constant in your artistic life. Do you have a teaching philosophy about the arts?
I taught art in secondary schools near Portland, Oregon, also in a Lewis & Clark College masters education program for elementary school teachers. I left teaching to move to New York and nurture my own art, but ironically ended up in publishing, working to nurture other artists. My role as art director for various publishers has been a teaching job—one on one, instead of in a classroom. This is especially true when I work with first time illustrators.

I taught in the Communication Design Department at Pratt Institute, and at The Center for Book Arts. When my daughter was in preschool I also began volunteering in her classes, developing art projects related to the curriculum. This lead to writing several art curriculum guides for Scholastic Teaching Resources, and a steady gig writing Instructor Magazine’s “Masterpiece of the Month” and the accompanying “Art Workshop” features.

I don’t see art as separate from other subject matters. It relates to everything. It is a way of understanding other cultures and moments in time when verbal language isn’t easily decoded. I believe everyone can develop visual language abilities, both skills of interpretation and skills to communicate in visual language. I need to draw when I want to explain something—to show when I can’t tell. Nothing extends time, let’s me live in the moment, and empowers me, like working with my hands in visual problem solving. There are different kinds of intelligence of the brain, and it’s essential to give full expression to all of them for whole human beings. 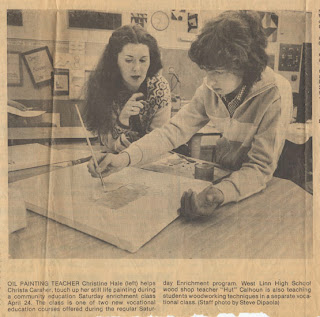 In The East-West House: Noguchi's Childhood in Japan, your protagonist, Isamu, finds comfort in forms of nature, “Color, light, and shadow. Earth, wood, and stone.” How do elements of nature inspire and influence your own creative work?

Isamu Noguchi had a painful youth as an outsider in Japan. He had a Caucasian mother and a Japanese father who wouldn’t claim him. He was teased and bullied by other children. Thank goodness he was at home in the natural world.

Noguchi, a sculptor, was a 3-D person. I am a 2-D person, particularly sensitive to color, shapes, texture and pattern. My inclination to interpret the world visually informs my writing, as mentioned earlier.
Posted by betsy woods at 9:46 AM

Christy and Betsy, another very interesting "illustrator" interview! I love learning more about this artistic process and the many different forces (movement, light, music, etc.) that shape it. Thank you both for this new insight.

Amazing interview. Christy, your resume is so impressive. I can't wait to see more of your books as both writer and illustrator.

Great interview! I completely agree with you Christy that art is part of all curriculum and should be incorporated across the board instead of "cut all together!" What a gift you are to children's books and to schools. I love learning more about all that you have done! And listening to the right music is essential to each picture book-- Salsa music for Juan Bobo and the Pig is perfect!

oh! and I am very excited for your next book! Yay Lee & Low!

Christy and Betsy, thanks for this interesting interview. I love the idea of your next book, Christy, and look forward to hearing about how it builds up.

I loved learning about your philosophies concerning art and also some of your background, Christy. Very informative interview!

I am so sorry, Christy, to hear about The Shape Tree being "shelved" before it could be literally shelved. I hope you are free to submit it to other publishers.
Once again, I loved learning more about these extremely talented people I blog with.