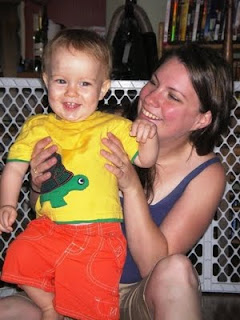 What a wonderful day to be blogging!
My main thanks go to having a daughter alive. A few months ago Juliana phoned me to say that she thought she would be calling with good news but not anymore. She'd had a miscarriage. Sad, but not the end of the world, except that two weeks later she began having an awful pain. This is a lady who didn't say "Ay" when delivering Conor. It was worrisome to hear her complaining now. Her hormones indicated she was still pregnant, but the fetus wasn't in her uterus. One of thirty-three thousand ladies have a baby in a tube and another in a Fallopian tube. So, the doctors discarded that possibility. One day the pain stopped. Juliana was feeling fine, but the hormones didn't go down as much as expected. When her white blood cells went down, worried about an infection, the doctors decided to operate. They found a ruptured Fallopian tube. The fetus had made kind of a cork that saved my daughter from a hemorrhage. Today she's doing well. Her other tube is good. And I am super thankful for having this brave woman in my life.
My father's ninetieth birthday was on November 8. My sister took him to Connecticut and I flew from Oregon to meet him at the airport. When he saw me instead of seeing my sister, he thought that the pilots had made a mistake and had flown him to Portland. We had unforgettable days celebrating with him.
My writing thanks go to my papas calientes, writing group, editors, educators, students, colleagues, writers, READERS, and the inspiration that comes from above.
May you have a peaceful, healthy and loving day.
Posted by Carmen at 9:53 AM

I'm so glad everything is fine with your daughter. Have a fabulous holiday, Carmen!

Very scary! What a wonderful miracle that your daughter survived that situation. How touching to have that time with your father too.

What a roller coaster for you and your daughter! So many things to be thankful for!