An Awesome Book I Read This Summer

Our topic this round is an awesome book that I read this summer. This wasn't easy, because I was lucky enough to go to ALA and pick up a bunch of ARCs of forthcoming YA novels. Some that I loved: Reality Boy by A.S. King, Forgive Me, Leonard Peacock by Matthew Quick, This Song Will Save Your Life by Leila Sales, and Tumble & Fall by Alexandra Coutts. But if I had to choose one that totally blew me away? This one. 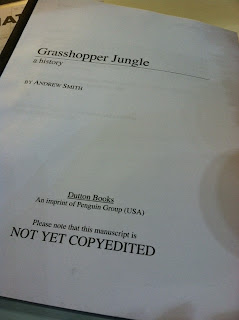 I know, I know, you're thinking, "That looks rather dull." Here's the thing. I heard a rumor about a few copies of this pre-ARC being available at ALA, and I hunted it down. I asked the lady manning the Dutton booth and she dug one out for me. Then she took the rest, a stack of about ten, and set them out. Now I saw people completely ignore this rather plain-looking stack in favor of colorful, shiny, conventionally bound ARCs.
People? Big mistake. Huge. Because I think Grasshopper Jungle by Andrew Smith will be the most talked about YA novel of 2014. I dragged that six pound stack of paper on the plane with me and devoured it by the time I landed in Boise.
Here's what the summary on Goodreads has to say:

In this truly shocking, grotesquely original coming-of-age, end-of-the-world novel, sixteen-year-old Austin Szerba interweaves the legacy of his family’s history in Poland and immigration to the United States while narrating the story of how he and his best friend brought about the end of humanity and the rise of an army of unstoppable, human-sized (six-foot-tall) praying mantises in small-town Iowa.
To make matters worse, Austin's hormones are totally oblivious; they don't care that the world is in utter chaos: Austin is in love with his girlfriend, Shann, but remains confused about his sexual orientation, stewing in a self-professed constant state of maximum horniness, directed at both Robby and Shann. Ultimately, it's up to Austin to save the world and propagate the species in this sci-fright journey of survival, sex, and the complex realities of the human condition.
And here is what the shiny ARC looks like: 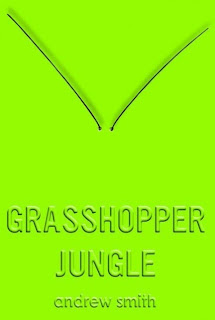 Awesome, yeah? I loved this book.
Posted by Stephanie at 3:25 PM

This one sounds like one of those once in a life time reads that takes you to a place you never even dreamed of!

Tanks for the heads up Stephanie. I am eager to read this.