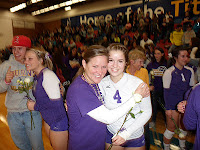 This is my youngest daughter and I this past
Saturday night, moments after she and her teammates won the Oregon 3A State Volleyball
tournament. From the moment the season started, even before the first day of
practice, she told me she wanted to win state. That goal was one shared by her
teammates, only three of which had even been on varsity the previous year. And
things looked good for the first 6 weeks of the season. But then our middle
hitter blew out her knee, sidelining her for the rest of the season. The team
didn’t have a replacement for her, our school is small, so they just
reconfigured the line-up. They missed their middle hitter, but they made do,
and they still thought they could win state. They were undefeated in league
play, and had a 28-2 record going into the quarterfinal, which they took easily
in three games.
But our semi-final game on Friday night, our girls
played the worst game of their season. They couldn’t serve, couldn’t hit,
couldn’t pass. It’s easy to win when everything is working, but when it isn’t,
well…then you need to dig deeper. And they did. I don’t know how, but they managed
to eke out a win. I think I was prouder of them for that win than any other
game this season. And when they stepped on the court for the championship game
on Saturday night, I could feel it. They knew they could do it, and they played
like it. Minutes after this photo was
taken, my kid got a gold medal around her neck.
How could a team just have a goal of winning state
like that? Because that’s the best you can do, and they wanted to be the best.
What if their goal had been to have a better than .500 season? Or to finish top
3 in their league? Decent goals, but really, what would be the point? Don’t you
have to dream as big as possible? Why NOT have a goal of that gold medal draped
around your neck?
My husband pointed out that during the semi-final
game, a game we needed to win in order to make the finals, our girls were
playing “to not lose”, instead of playing “to win.” And I realized writing is
the same. I start each book with a goal. But is my goal big enough? Am I simply
writing to “not lose” instead of writing “to win”? Each time I start a book,
shouldn’t I have the loftiest goal in mind? I mean, if my goal for my book is
simply to have my friends like it, or to make the shelf of my local bookstore, or
to get a dozen fan letters, what’s the point? Like my daughter, why aim for
anything else BUT the state title? For me, why not admit yeah, I’d love a best-seller or a Printz or a Newbery? If I don’t have that level of goal in mind
when I write, what’s the point?
There are seven volleyball teams that drove home
from Eugene today without the state title. They’ll all try again next year, and
someone else will win. Just like each year, there are hundreds of authors who
don’t get the big awards, myself included. But each new book I write, I’m back
in the running. I’m writing to win. And, like a state volleyball tournament, it’s
exciting, because you never know when you might just meet your goal. My
daughter, and her dreams, taught me that.
Posted by Stephanie at 7:29 PM

Aw, thanks Lauren. Funny what we can learn from our kids...

I love that Bailey and her teammates were so determined. Seems like resolve is a key element in making things happen for anybody. Talent alone won't get it done.

I know I keep channeling Madaleine L'Engle, but I love this quote by her:

"I think that all artists, regardless of degree of talent, are a painful, paradoxical combination of certainty and uncertainty, of arrogance and humility, constantly in need of reassurance, and yet with a stubborn streak of faith in their validity, no matter what."
—Madeleine L’Engle, A Circle of Quiet

Here's to "stubborn streaks of faith" for athletes, writers, artists--all of us.

I love that quote. We have to have faith in what we do or what's the point?

"Resolve" is a key element in making things happen. Christy I love this quote~ where did you find it? Are you reading a L'Engle biography?

Whoops-- I just noticed the name of the book next to the quote. Thanks!

Assuming success and not failure is vital. I've seen it work in my life, and it sure worked for your daughter! I'm going to continue to dream big with my current project...and I'll be waiting to see your name on the Newbery list soon, Stephanie!

Dream big, indeed! Great post, Stephanie. It reminds me of an antithetical experience I had a few years back at a mental health training in which the facilitator said something to the effect that each person in attendance needed to realize we are all the same, nobody is special -- that none of us were going to win a Pulitzer or the Nobel prize, etc.... I remember sitting there thinking, But what if your ambition IS to win such an award? And, remember, this was a mental health professional encouraging us to dream "small." I'd much rather take your view, Stephanie!

Mark, that's so sad. I'm of the opposite mind, that we all ARE special. I mean, don't we have to think that way in order to chase our dreams? :) And David, I wouldn't hold your breath, but I won't stop trying...