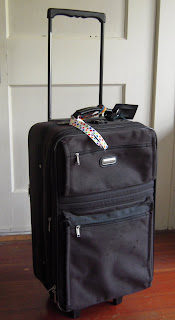 This autumn has seen me traveling to Hayward and Wausau, Wisconsin, as well as Royalton and Sebeka, Minnesota for speaking engagements. I don't do a lot of traveling for work, but just enough so that it still remains enjoyable.

I like getting away from home, even for a few days. It's a treat to stay at a hotel where someone else makes my bed and I don't have to worry about doing dishes, taking out the garbage, or other household chores. Some authors get a lot of writing done on the road, but I don't. Instead, staying at a hotel allows me the luxury of an hour or two of reading in the evening, which I don't often take at home. I'll sometimes even turn on the television to see what the rest of the world is talking about as I don't have a working television in my apartment (so that's what "Dancing with the Stars" is all about!).

Visiting rural schools is especially rewarding, as those students don't have the opportunities kids from larger cities have, and they - and their teachers - are usually very appreciative. When I visited the small town of Sebeka last week, there was a student waiting for me at the school door to escort me to the office, the hallways were lined with bulletin board displays of my books, and I was given the honor of being celebrity judge for the fifth graders' pumpkin decorating contest. In the mail yesterday I received a thick packet of letters from the Sebeka students thanking me for my visit. These sorts of things make the long hours of driving well worthwhile.

Other highlights for me about traveling: visiting the local diner AND the bakery (don't miss the Moon Pies in Little Falls), listening to books on CD (which makes driving time fly by), and being able to soak in a hotel's whirlpool at the end of the day. And one of the most important things to pack to ensure happy travels: earplugs, just in case the hotel's walls are thinner than you'd wish.
Posted by David LaRochelle at 1:53 PM

Great post David! I love the traveling tips as well as the atmosphere you describe at the school. It's such an exciting event for students to meet a real live author. I'm sure the student who escorted you to the classroom was proud of his/her duties that day!

This is sweet. You surely have all the right priorities!

David,
I'd love to be one of the students in the rural schools you visit. Thanks for the travel tips!

David, you are a pro at this and your love of diners and pie comes in handy. What a treat for these teachers and students to have you come and share your books with them and what a wealth of knowledge you derive from your travels.

I agree, John, that these travels broaden my scope of the world, even if I'm only traveling a hundred or so miles from home. Being in a school building that hosts students from grades K through 12, or working with students who know more about tractors and rodeos than they do about shopping malls, widens my world view.

Great post David! I must remember the earplugs tip! Thanks!

Plenty of great tips, David. I love how you find a balance in your life and also how you take advantage of what new/different experiences offer you. Your healthy attitude inspires me.