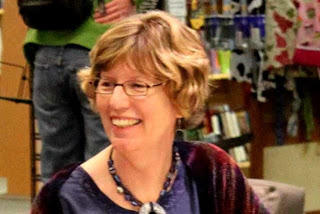 C: Edie, I have wanted to interview you since last summer when I finished reading Road to Tater Hill.

C: What do you think is the trick to writing a book that mentions records and a hi-fi when your readers are playing music in CDs and iPods? How and why do they get interested in historical fiction?

E: Hmmm, I’m not sure I think of it as a trick. I have loved historical fiction from the time I first learned to read. It’s the perfect way to travel to another place and time without leaving my house, and I can actually “become” the protagonist as I’m reading and “live” through that particular era. Now that I am writing historical fiction, I think the “trick” may be to first do my research thoroughly and then to use specific concrete and sensory details right from the start to ground the character (and the reader) in that place and time. For example, when referring to Grandpa’s hi-fi set, Annie leafs through the albums and then is careful not to scratch the record as she sets the needle down. By that point in the book, I hope my readers are so connected to Annie and her emotions that they can automatically believe and picture what she does without questioning the actual details or taking them out of the context of the story.

C: Your novel is so truthful. Where were you in the summer of 1963 while Annie was in Tater Hill?

E: Well, though Road to Tater Hill began as an autobiographical event, I did fictionalize parts of it. The first act of fiction was to move the loss of my baby sister from the summer of 1961 to 1963. I did that specifically so I could also bring in the premature birth and death of the Kennedy baby in August of 1963. Because the circumstances were so similar to the events in my own family, I thought that might be the perfect way to help ground the story in actual events from the 1960s.

In real life, I did spend all of my summers (including both 1961 and 1963) in the North Carolina mountains with my grandparents (very close to the actual Tater Hill), and I used many of my own experiences, such as building a dam in the creek, picking blackberries on Tater Hill, and getting stung by yellow jackets, though some of those incidents may have happened during different summers.

Road to Tater Hill is in first person and it draws from your childhood memories. Wasn’t it hard to dig deep down into those emotions?
Those raw emotions have stuck with me throughout my life, so it seemed natural and right to delve back into those memories and mine the emotions from that time of grief. I guess it was almost cathartic to do so. Giving my protagonist (Annabel Winters) her own name, made it easier for me to allow Annie to become a character in her own right and not just a replication of me. She became stronger and spunkier than I was at that age and gave me a few other surprises during the writing of the book.

I think it was harder for my parents than it was for me. Every time I finished a chapter, I read it aloud to my parents, and of course it forced them to relive those memories, which were different for them as the mother and father, who not only lost Mary Kate, but also four other babies. I think they were surprised at the depth of emotion (and the isolation) I felt as the older sister. I have had to emphasize to my parents a number of times that the book is fiction, even though grounded in reality. My mother did not fall into as deep a depression as Annie’s mother did.

C: Do you have an exercise that may help another writer do the same?

E: Yes, I do have an exercise that I think is helpful for getting to the core of the emotion in a story. I ask my students to think back to an emotional event from childhood— a time of grief, anger, joy, envy, or fear, etc. Then I ask them to jot down where they were at the time and to concentrate on specific details. What did they see? What did they hear? What did they smell? Was there a taste associated with it? After they remember these specific details, I ask them to write the scene using these sensory details, but without actually stating the emotions they were feeling. I used this exercise myself when writing the scene where my character Annie finds the rock baby along the bank of the creek (pp. 11-13).

C: I enjoy the idea that two of my favorite authors carry the same name, Edith Hemingway and Ernest Hemingway. Is your husband, Doug, a 42nd cousin of Ernest?

E: I am honored to be one of your favorite authors! No, I’m afraid Doug is not a 42nd cousin of Ernest (although we have not actually researched his genealogy), but it certainly doesn’t hurt to be E. Hemingway if you’re a writer. :>)

C: You say that, after you had babies, you put your writing in the back seat for a long while. Completely? How did it make you feel?

E: I don’t believe I did any writing until my daughter was in kindergarten and suddenly I had about three uninterrupted hours a day to write. It wasn’t until then that I realized how much I had missed writing. I never stopped the reading, however, and reading is such an important part of becoming a writer!

C: It seems to me that you began to publish after you became a member of the Society of Children Book Writers and Illustrators (SCBWI). How did the organization help you to become a published writer?

E: The SCBWI organization has been invaluable to me for many years. I first joined way back in the 1980s. My membership sometimes lapsed when I couldn’t afford it, but I always returned after several years away. The inspirational conferences, the hands-on resources that help writers put together professional manuscripts, the connections with other writers and illustrators, and the opportunities to meet editors and agents face-to-face are a huge boost to many careers. The contract for Road to Tater Hill resulted directly from a critique I had with my “now” editor at a regional SCBWI conference in Maryland.

C: Could you explain how the collaboration between you and Jacqueline (Jackie) Shields worked? Did you fight?

E: Collaboration, especially when writing fiction, is not an easy thing. Both authors have to have the same vision and voice for the story and characters. Early in our partnership, Jackie and I made the commitment to write only when we were physically together, so that we didn’t go off on separate tangents. Learning to be completely honest with each other took time—neither wanted to hurt the other’s feelings, but we realized we both had to agree to everything that went into the final manuscript. No, we didn’t fight, but we had a few disagreements that we worked through, and we are still good friends, though we no longer write together.

C: What a dream it must be to be able to write in a secluded cabin! What does your writing schedule look like when writing in the cabin? Is it more productive than at home?

E:I am still looking forward to that dream of my secluded writing cabin! The building of it has been delayed until the snow melts and the ground thaws, but my husband is working on the plans. My log cabin home is still secluded and a good place to write, but with my husband retired now, I don’t have the quiet and solitude I used to have for concentrating. I can’t wait to be able to take my cup of tea every morning and walk through the woods to the tiny cabin to work. I hope it will be more productive, as I will not have the distraction of the Internet. Once the construction starts, I’ll post some photos.

C: You give presentations and workshops. Could you, please, give us more description of “The Role of the Drummer Boy in the Civil War?” It sounds fascinating.

E: During the course of researching our first co-authored book, Broken Drum, Jackie and I learned a great deal about the huge responsibilities shouldered by drummer boys (as young as 10 and up through age 17) in the Civil War. Drummer boys were responsible for sounding reveille in the mornings, and beating roll call, mess call, and sick call while in camp. In battle they were responsible for beating out the orders to advance or retreat, and helped to rally the troops and direct them back to their regiments. Supposedly they were kept at least 50 paces behind the front lines. And as if all this wasn’t enough, after the battles they were given the grizzly task of removing the dead and wounded from the battlefields. Broken Drum is the story of Charlie King, a 12-year-old drummer boy in the Pennsylvania 49th Regiment of the Union Army. It’s quite an eye-opening experience when we speak to students who are the same age as Charlie King!

C: Last question. If you can, please, speak about your next book. I can hardly wait.

E: I’m working on a middle grade novel set on Vinalhaven Island, off the coast of Maine. This is a place where Doug and I love to vacation, and we do a lot of kayaking in the basin and the coastal waters around the island. Naturally, there will be kayaking in the book, as well as a bit of a mystery. For the first time, I’m writing in two alternating points of view.

Edie, many thanks for sharing your stories with the world.

This is a wonderful interview, Carmen and Edie. I too love Edie's book, Road to Tater Hill, and agree that the book resonates as true, both in historical detail and in the characters' emotions. You were wise to give the main character a different name to allow personal distance and room to let the story take on its own life, even though this has many autobiograhical elements. Edie, I love the exercise you suggest. I want to try it!

Great interview! Thanks Edie and Carmen! :)

Very thorough interview! I love the exercise and I love the honesty of your answers. Thanks to both of you. I felt as if I was sitting in the room with both of you!

Thanks for your comments, and, yes, the exercise has been very effective for many of my students, as well as for me.

Thanks Carmen and Edie for this fun interview. You covered a lot of ground. Great picture Edie.

I love your "take" on historical fiction, Edie, and agree with others that the exercise to reconnect with childhood emotions sounds very useful. I am going to try it for the story I'm working on right now. Thanks! Great interview.

Great interview,I learned so much:)

These interviews have been a great way to get to know all of you spuds better. What fascinating roads all of you have traveled.
And how very generous of you, Edie, for giving back to the SCBWI by now being a regional adviser.